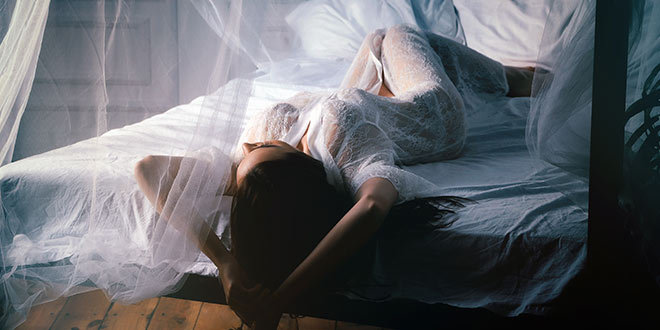 Sweet Dreams are Made of This! Sleep Orgasms, Explained

Sleep, glorious sleep! The opportunity to replenish our energy, increase motivation, and to de-stress. And if you thought that having a pleasant dream was the cherry on the cake, you’re sorely mistaken.

What is a Sleep Orgasm?

A sleep orgasm is when you climax involuntarily during your sleep due to the contents of your dream.

Sleep orgasms are more commonly known as a ‘wet dream’. It was given this name as it pertains to a male who ejaculates during sleep, leaving his clothes and or sheets wet.

Who Can Experience a Sleep Orgasm?

Just because many refer to this experience as a ‘wet dream’, doesn’t mean that it only happens to men. Women too can experience the bliss of an orgasm whilst asleep.

Men are more prone to the experience however because they produce a number of erections during their sleep.

In fact, according to Annabelle Knight , a sex expert, 40 percent of women have experienced an orgasm during their sleep.

She also says that this occurrence usually takes place when a woman hasn’t been sexually active for an extended period of time.

What Happens to Our Bodies Before and During a Sleep Orgasm?

Once a sleep orgasm has been experienced, a person may be left wondering what actually happened. It could be very confusing, perhaps even disturbing, especially for young boys. But there is a method to this madness…

When we sleep, we experience something called ‘REM’ (Rapid Eye Movement). It is often during this phase of sleep that we experience vivid dreams, causing a slew of changes within our body.

Our brains are highly active, our heart rate increases, our bodies become temporarily paralyzed, and blood rushes to our genitals (one’s penis or clitoris) causing them to become sensitive, and us, possibly aroused.

And even though we physically cannot touch ourselves during REM, the sensations that are being imagined are very real to our brain. This is because of the mind-body connection that we have.

Our bodies have the ability to react to dreams as if they were actually happening in real life, which is how we can experience sleep orgasms.

For some, orgasming in their sleep is actually easier to achieve, as it doesn’t pose any external distractions (noise, stress, being in one’s own head etc.).

During the day, we’re bombarded with thoughts, actions, conversations, and other stimuli that often reduces the time that we have to let our minds wander.

When we’re asleep however, we experience peace and relaxation. “Stress doesn’t exist in your sleep when it comes to climax,” says Knight.

Techniques to Induce a Sleep Orgasm

While it’s impossible to guarantee some midnight magic, there are a few techniques you can practice to try and induce an orgasm during your sleep.

Lucid dreaming is when you are able to realise that you’re dreaming. It’s also when you have a certain amount of control over the contents of your dream. It’s being in a state of self-awareness whilst in the REM state.

To work on your ability to induce lucid dreaming, you could use these three techniques:

Reality Testing: This is when you ask yourself, “Am I dreaming?” several times throughout the day, followed by doing something that may not be possible during your waking hours (such as trying to have your hand pass through a solid wall). Doing this will prompt you to do the same during your dream (where your hand will actually pass through the solid wall).

Waking Back to Bed: This is when you set an alarm to wake up after five or six hours of sleep, and once awake, remain so for a while before going back to sleep. By doing this, you’ll have a higher chance of entering the REM phase.

Mnemonic Induction: This is to continuously say an expression right before bed, such as, ”I will notice that I am dreaming tonight”. This is a way to re-inforce lucid dreaming.

Those who experience lucid dreaming will then have the opportunity to manipulate their dream, say for example, having the best sex of your life with someone you’re extremely attracted to.

It’s also been found that sleep orgasms are more common in older women than younger women.

According to one woman in her early 30’s who has experienced climaxing in her sleep:

“For me, orgasming is all in my head. I get off mainly on the sexiness more than the physical, like the imagery and thinking about it.

So, say I met a guy I’m super attracted to. Because I am already horned up and want to have sex with him, sometimes I will in my dream.

And because I’m already throbbing and dying for it, the pure thought and imagery from the outside can do the trick.”

Sex Dreams: What do They Mean?

An example would be if you were to have a sex dream where you did not reach climax. This could mean that you are lacking or unable to complete something in a different sphere in your life.

Another example, if you dream about sleeping with someone other than your partner, it doesn’t necessarily mean that you want to cheat or are unfilled with your partner. It is more so a nudge for you to realize that you are seeking new experiences in general, be it at work, home, or elsewhere.

Other Surprising Connections Between Sex and Sleep

As learned, sleep is incredibly powerful—and necessary in order for us to function optimally. So it’ll come as no surprise that too much or too little sleep can have a big impact on our sex life.

Here are four strong connections between sex and sleep:

A Healthy Sex Life Leads to Better Sex (and vice-versa)

Oftentimes improving one of the above will lead to the improvement of the other.

The inability to sleep can cause stress which, in turn, decreases the production of sex hormones in an attempt to increase stress-fighting hormones.

Women are more prone to feeling a lower sex drive during pregnancy and early motherhood, as being pregnant or a new mother usually involves less sleep, fatigue, and stress.

It only seems logical to deduce that more sleep equals a higher sex drive. And a study conducted in the medicine department at the University of Michigan confirmed just that. The study, focusing on 171 women, found that those who slept longer were more interested in sex the following day .

This occurs because of something called ‘confusional arousal’, which means to be aroused during the deepest stage of sleep. The person who experiences sexsomnia is not conscious during these sexual acts, nor are they dreaming.

And while sexsomnia is not very common, it can be induced by a lack of sleep, obstructive sleep apnea, traveling, stress, sharing a bed with someone, or excessive drug or alcohol use.

Sexsomnia can be treated once a reason for it has been established, and it is not an on-going disorder. Some treatments include changing one’s sleeping pattern to receive more high quality sleep, or for those with sleep apnea, using a CPAP (Continuous Positive Airway Pressure) machine at night.

On a lighter note, yay for sleep orgasms! Ready to rock your dreams by adding some big O’s to your Z’s? Yes, please!

The post Sweet Dreams are Made of This! Sleep Orgasms, Explained appeared first on Volonté .