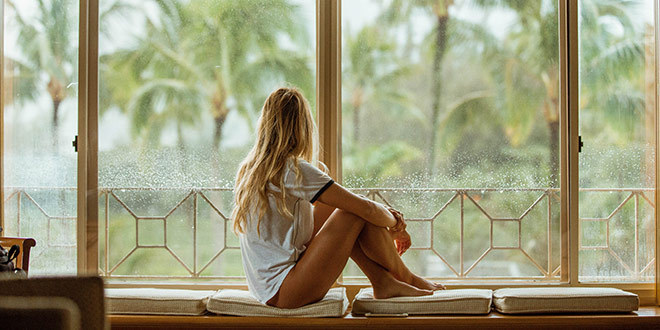 At first it had been easy, and Jim would freely admit as much, but after a couple of days the novelty wore off.  He always thought being told to stay home from work, and (luckily, with his job) getting paid to do so, would be a dream come true.  As with so many things in life, getting what you wished for was not so much fun.  He soon cursed the coronavirus, the COVID-19, or whatever the hell its proper name.

After those initial days, being told not to leave his house made Jim want to leave it that much more.  There was nothing he wanted to watch on television, despite endless channels and streaming services.  He tried to occupy himself by tidying his already tidy home.  He rearranged the furniture.  He paced the downstairs, the upstairs, he tried to nap.  Jim never knew cabin fever was so easily contracted.

But then he discovered his neighbor.  It was a complete accident, of course.  He was pacing one morning, stalking the upstairs back and forth between his room and the spare bedroom, moving things from one place to another for no other reason than to do it.  As he happened by the hall window, his neighbor happened by hers at the same time.  In that instance, by mere chance, Jim turned toward the window to look out at the brightly lit morning.

She had stopped in her house, in front of her window, in her loose pink robe that opened as she raised her arms to tighten the towel wrapped around her wet hair.

Jim stopped, unaware that he had done so, unaware that he was watching her in full view.  If she thought to peer out her own spotless window she would see him, but it didn’t enter his mind.  His mind was preoccupied with her gaping robe, the tanned curves it exposed of her body.  His heart stopped at the ebony tuft of her pubic hair, the fullness of her breasts.

His hands gripped firmer the box he carried.  Heat warmed his face and a rush of blood made the confines of his grey sweatpants much tighter.

She stopped, arms still raised, hands still toying the towel atop her head.  Her eyes stared across at Jim in the house opposite hers.

Jim standing in the window, staring at her.

She closed her robe.

Jim jumped out of sight, dropped his box of brick-a-brack.  He squeezed the bulge in his pants.  Already, a mark of precum moistened the material.

He sidled to the window and carefully peered out.

She still stood there.  She had removed the towel to let her long dark locks cascade over her robed shoulders.  The robe itself she had tied tightly closed.

She saw him and gave a little wave.  She smiled and shrugged her shoulders, Oh well.

Jim stepped back into full view.  He returned her wave and turned his head sheepishly to the side.  He looked at her, finally, guilty, and shrugged his own shoulders.

He gave her a thumbs up.

She held up her hand for him to stop.  She motioned her fingers from her eyes to him: I showed you mine, now show me yours.

Jim’s eyes widened.  His heart doubled in rhythm with the hardness in his pants.

He shook his head, embarrassed, no.

She swiped her hair off her shoulder.  Slowly, she opened the top of her robe to expose her right breast.  She teased her nipple, pinching it.

She wriggled her eyebrows.

He pulled his t-shirt off.

Her face expressed, Not bad.  She slipped the robe off one shoulder.  With an influx of breath, she arched her back, turned her head seductively to the side.  Her free hand slipped low inside the folds of her robe.  She removed her hand and licked her fingers.

In a pure, swift motion, she let the robe drop to the floor.  She cupped her breasts, squeezed them with a smile, and let one hand wander down her stomach to the thatch of hair between her legs.  Her fingers wove through the dark forest and ventured to the moist recesses below.

She nodded at Jim.  Go ahead.

Jim hooked his thumbs into the waist bands of his pants and underwear.  He was achingly hard.  He pushed his clothes gradually down, allowing the elastic bands to crawl tortuously over his erection until, liberated, his cock bobbed free and glistening.

His neighbor leaned against her window.  Her tanned flesh whitening with her breasts pressed to the glass.  Her one hand massaged a nipple while the other worked the fires below in a flurry of activity.

Jim kicked his clothes from around his ankles.

Across the way, his neighbor was lost in her own ecstasy.  Her eyes saw him, admired him.  Her breath fogged the panes.

Watching her fueled the fury of his fist.  Her watching him kept the ferocity alive.

Her actions intensified and he followed suit.  He pumped harder, harder, to keep pace, feeling himself at the edge and unable to stop.  He dreamed of sliding inside her, enveloped by her heat, of tasting her, consuming her, drop by drop.

His body felt as though it were to explode, tunnelling to an all-consuming release.

With rigid stabs he came, shooting long white cords onto the window.  His knees threatened to buckle and he had to steady himself.

She removed her hand from between her legs and he imagined it wet, sticky, warm.  She traced a finger down the pane, leaving a smudged streak.

Jim, sweating, still hard, still throbbing, tapped his cock on the glass and smeared the mess he had made there.

He wiped his arm across his brow.  When he looked up, his neighbor was gone.

Maybe he could survive staying at home after all.

Intimate Tickles found this article quite interested, and we thought you might to. We give all the credit for this article to Jacob Jaspers. Click Here To Read This Article From It's Original Source