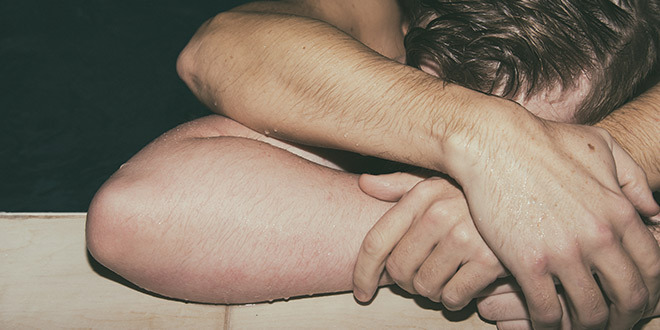 Between the Dark and Light – #StayHome Erotica Contest Finalist Story

The bar had a crack in the ceiling that spanned the length of the thousand square foot container for all things everyone twenty minutes East of here would lose their shit over. Just two Monday’s ago Jim, the owner, hosted a piss party on the back patio to celebrate the end of July. Twelve muscle hunks, fully nude, pissing on whoever threw twenty bucks in the Folgers can.

Two nights ago was what Jim affectionately referred to as ‘on a leash Saturday’ where leather Daddies could get in at half cover if they had a boy on a lead. Other nights people were able to get in on half cover as long as they had whatever Jim deemed as enough skin showing. Jim used to run the place differently, but then fifty hit and he broke out his Hawaiian shirts for year round wear and smoked cigars like some people smoke cigarettes.

Travis and I met here eight years ago, at Jim’s.  It was on a Thursday night in November before Jim started doing theme nights. The regular crowd back then wore Carhartt jackets starting in November when the Iowa winter set in. There were boots caked in mud and shit, George Strait was playing overhead, and then there was Travis. He was angular, and quiet, sitting at the end of the bar with just an old fashioned to keep him company. He had a gray wool pea-coat and black leather shoes I could damn near see my reflection in.

We didn’t slip suburban romantics to one another. We didn’t hold hands, or swap spit. He relaxed his face at me and smiled, and I smiled back. I gestured my beer towards him, I was just as alone as he was. When he’d smiled I’d noticed the thin gap between his two front teeth.

It was on the thirty minute drive home that I veered into myself, and turned left going straight into the crack between those two front teeth, washing Travis’s kitchen window in the yellow of my truck’s headlights. He came to the door, his pea-coat now off to reveal a navy blue striped oxford. His hands were strong but bony. His mouth tasted like the sweet side of whiskey, and as my mouth found his collarbones I could taste sweet tobacco vanilla that stuck in the back of my throat.

My armpit, his nose and mouth. His pelvis aligning with mine, our wiry pubic hair intertwining. Our mouths were so wet and our skin was so electric. We could each feel the other’s blood pulsing just below the surface. It was the first sexual experience that didn’t require an orgasm for a satisfactory rating.

He smiled so easily and brought my face inches from his, cheek to cheek, and batted his eyelashes against the side of my head. Butterfly kisses, I groaned, the last person to ever give me those was my mother. I could feel his erection against mine. My palm met his freckle spattered shoulder, guiding him onto his belly towards the foot of his king size bed. His ass, thighs, calves, I sat there drinking it in before rubbing my graying beard against his fair skin.

Across from his bed sat a floor to ceiling mirror; we belonged in a photo only Tom Bianchi would take, his paleness against my tanned skin.  His youth, my age.  His softness, and my blue collar muscles just below a thin layer of fat. His asshole was musty, sweaty, so, so pink, and it drove me mad.  My erection was borderline aching as I placed my face between his globes.

We were lost there, in him, together. He was so relaxed I could fit my pointer finger inside of him, with a dash of lube I could add a second finger, then a third. The condom packet tore easily, and went on in one swift tug. Warm suction. It’d been almost a year since I’d been inside of anyone. I groaned, my entire body shook just a little. My ass clenched. I almost hadn’t realized that my climax was well on it’s way until his voice cracked, like the ceiling back at the bar, and I was sitting in the dark of my driveway.

The post Between the Dark and Light – #StayHome Erotica Contest Finalist Story appeared first on Volonté .

Intimate Tickles found this article quite interested, and we thought you might to. We give all the credit for this article to Quinton Jordebrek. Click Here To Read This Article From It's Original Source