Are you the type of person who dares to be bold? Who would rather rock bright pink hair, look up at the stars at night as opposed to watching Netflix , or spell out your favourite words on your lover’s arm using the tip of your finger? Yes! We love all things not-so-mainstream and using one’s creativity to get really hot and heavy in the bedroom.

Which is why we’re big fans of kink! Or is it fetishes? See! That’s why we’re here today… to let you in on the 411 when it comes to these two terms, because there are tons of people who tend to use them interchangeably.

So, if you don’t know the difference, don’t be embarrassed… it’s totally an easy mistake to make. And after going through our kinky text, you may just reach your ‘ah-ha!’ moment when it comes to your own personal taste and sexual interests! 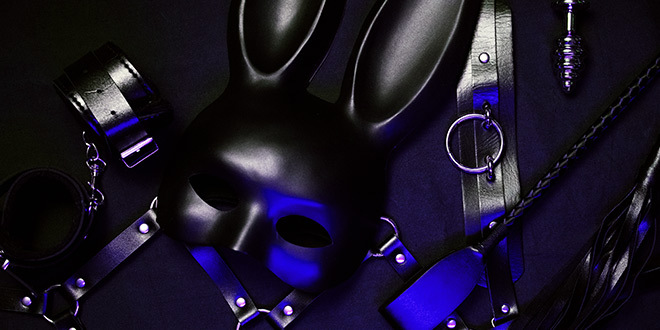 What is a Kink?

A kink is basically anything that can be categorized as a non-conventional sex act. Basically, it’s the opposite of vanilla … but this too is a loose definition. How so? Because a kink is one of those things that can be unique and personal to each individual person or couple. Confused? We’ll circle back in a moment.

What is a Fetish?

A fetish is in the same realm as a kink, but is more so an abnormal desire for something, like an object, part of the body (usually non-genital), a certain type of material etc. In fact, almost anything can be fetishized. For example, a growing fetish is that of a foot fetish . This is an abnormal intrigue and sometimes arousal caused by someone’s feet.

Then let’s look at a different example. There’s a guy, let’s call him Billy. Billy finds himself totally enthralled and completely aroused by the idea of experiencing cock and ball torture. For Billy, this is his primary source of pleasure, and he doesn’t really find anything close to the sexual stimulation that he feels whilst enjoying a bit of CBT.

Paraphilia is when one has abnormal sexual desires that are often categorized as extreme or dangerous. Some examples of paraphilia would be necrophilia (sexual acts with a corpse), scat play (defecation or sexual obsession with faeces), and zoophilia (a sexual desire for animals).

So while a kink and a fetish are two different things, both could fall under the term ‘paraphilia’ if the kink or fetish is extreme or dangerous.

Are Kinks and Fetishes Always Sexual?

We don’t want to be those people who say yes, despite the fact that the terms ‘kink’ and ‘fetish’ are almost always used in the sense of sexuality.

It is important to note however, that some people don’t necessarily act on or get aroused/climax because of their specific kink or fetish, but merely enjoy the sound, taste, sensation of it in a non-sexual way. And then there are those that identify as asexual, who too can form kinks and non-sexual fetishes.

What Are Some Popular Kinks & Fetishes?

It’s not as easy as presenting an A-Z list of kinks and fetishes. In fact, it would be simply impossible to know or educate others on every single kink and fetish that exists, because it is unique to every individual.

“Sexual fantasy is highly varied across the spectrum, so fetishes might simply be one element of our diversity in terms of sexual interest and arousal. That means we’ll have different tastes just like we do in food.”

But, here are a few of the most common kinks and fetishes:

Are Kinks & Fetishes OK to Have?

They are… and they aren’t. You see, it all depends on the severity and choice of fetish when it comes to them being harmless or not.

On the other hand, there is such a thing as fetishistic disorder. This is when there is an intense sexual attraction to something (like an inanimate object or body part) that’s coupled with clinically significant personal distress or impairment (such as social, occupational, or other).

Interesting fact: Fetishistic disorder is exceedingly more prominent in males as opposed to females. So much so, in fact, that the DSM-5 (basically the holy scripture when it comes to mental disorders) says that this disorder is almost exclusively found in males.

How Do Kinks & Fetishes Develop Over Time?

Now that we know the interesting bits and pieces about kinks and fetishes, you may be wondering where they actually stem from? Is it a question of nature vs. nurture? Is it an innate trait that we carry with us?

According to Dr. Richard Krueger of Columbia University Medical Center :

“Generally speaking, a typical case may be somebody happens upon an object by accident or through exposure to leather, or dolls, or part of a human that’s non-sexual, such as a foot or toe, and finds it pleasurable, so they continue using it in a sexual way.”

With that, let’s take a look at what another expert has to say about the development of a kink or fetish…

Samuel Hughes, a researcher at the University of California , decided to go on a big quest to uncover how and why people develop their kinks and fetishes. He found that those who had one or more kinks or fetishes fell into one or more of these five categories (which was modeled on the Cass model of coming out for gay individuals).

Self-exploration: Between the ages of five and 14, one might seek out certain kinds of erotica whilst learning about their bodies and what they like.

Introspection: Between the ages of 11 and 14, one has realised that they have certain interests and they’re able to evaluate how these interests impact their lives, whether it be positive or negative.

Community: This phase is all about realizing that others share the same kinks and fetishes as you, and it happens after the age of 11. This community is often discovered via the Internet, and at events, groups, or conferences after the age of 18. This sense of community often gives the person a feeling of belonging, and allows them to see their kink or fetish in a positive light.

Outside exploration: This is when a person actively participates and engages in their kink or fetish. This is often being with another person and practicing their preferences.

The Shift from Taboo to Typical

To end off, it may be interesting to know that a kink or fetish has the ability to transform into something completely mainstream, depending on society and the way in which the world evolves.

For example, a study was done by Gary Brooks, author of The Centerfold Syndrome , on MBA students at Stanford. He found that 88% of these test subjects “read” the Victoria’s Secret lingerie catalogue, while the classic Playboy magazine has gone basically unnoticed. Why?

A mere 15 years ago, lingerie was considered a fetish. And those who grew up in the Playboy era have perhaps grown up to continue believing that to look at the magazine is a taboo. Today, Victoria’s Secret could be considered the equivalent of Playboy to an extent, and can be found all over the world. The difference today is, viewing and marketing lingerie is socially acceptable. Interesting!

And let’s not forget the Victorian Era, when even the sight of bare ankles could send someone over the edge!

To sum up, it’s evident that it’s pretty darn hard to define what a kink or fetish actually is. This is because it is often a very personal and unique individual experience, and because of how society continuously evolves.

Nevertheless, if you find yourself with a kink or fetish and are feeling quite weird about it, there’s absolutely no need (unless said-kink or fetish causes significant personal distress or impairment).

Our advice? When it comes to sexuality, you do you! Because it’s oh so delicious to get your rocks off!

The post What’s the Difference Between a Kink and a Fetish? appeared first on Volonté .