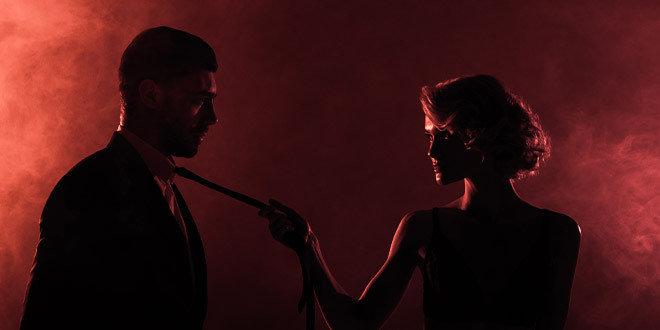 Is a Female-Led Relationship (FLR) Right for You?

Every single relationship is unique – that’s what makes love so fantastic. Power dynamics, our little shared quirks, the way we approach our love – no two couples are identical when we slice apart how they function. Some love a balance in power, others like when the scales tip in one direction or the other – and in a female-led relationship (FLR), that’s exactly what goes on.

In most hetero and hetero-assumed couples, the man and woman act out roles that affirm what already exists in the world around them. You see the status quo every day around the world: men in control . Even in places like the United States, it’s normal to see a man roll his eyes conspiratorially at another man while he talks about his wife’s driving skills – all while she’s standing right there. It doesn’t help that the country’s leaders have always been men. When we see this day in and day out, it’s no wonder that this mentality wraps itself around our personal lives.

Well, my straight, straight friends, it turns out that doesn’t have to be the case. If you’re like most folks, there’s come a point where you’ve questioned it. But some of us aren’t satiated with an egalitarian relationship; instead, some people are hungry for a chance to see what life would be like if the woman of the house ruled their world with an iron fist. Some want to take their thumb and weigh down the scales in the other direction.

Sound like you? Then you’re in luck. It turns out some straight couples have long been turning the rules on their heads. They’ve been living the life with a female-led relationship – and you can too.

What can I expect in a female-led relationship?

The great thing about entering a female-led relationship is that the more you explore what works for you as a couple, the more limitless you’ll realize the options are. Just like straight couples who choose a more balanced power dynamic and queer couples who discuss and set their boundaries together, those in female-led relationships discuss and set specific guidelines to satisfy both parties.

In a female-led relationship, the rules you set can be as simple as the man taking on more chores at home (as set by the woman), or can bleed into every facet of your relationship. Whether that’s having the final say in everything from the social calendar to the dinner plans, or just controlling finances and the bedroom, the choice is yours to make.

For most couples, there’s one place in particular that things are bound to change: the bedroom.

How does it change my sex life?

Depending on the agreement she and her partner reached, she either sleeps with the other men while her husband stays home and cleans, or she lets her partner watch her get it on with another person. Sometimes, cuck relationships even entail the man helping the woman pick out her new partners, and he may help her get ready for a date. Drawing her bath, getting her outfit ready, doing her hair, and painting her nails are all common tasks a woman may require of her partner in a female-led relationship.

This still rears its head in the sack in a few different ways. For instance, she may be in charge of initiating sex – either by scheduling it or being the one who decides when it’ll happen. The woman in charge may also tell her husband the kind of sex they’ll have, and tell him something along the lines of, “If you finish all your chores tonight, I might let you go down on me later.”

What are the benefits?

And regardless of if you’re a man or woman, there are several benefits. For women, the pleasure looks something like this:

It’s not just women who benefit. Hetero couples who get into this world frequently do so because the man initiates it. In fact, it’s easier to find websites online guiding men on how to encourage their wives to sign onto a female-led relationship than it is to find articles about the opposite. Men are actively seeking out a female-led relationship. Because everybody and every kink is blissfully unique (arguably, even each vanilla couple has their own flair), there are countless reasons why a man seeks this kind of lovin’ out. A man with a natural flair for submission, for instance, finds female-led relationships to be a little slice of heaven.

So do men who hold a lot of responsibility during the day. Working important jobs, or engaging in high-stress work environments, it’s appealing to come home and surrender wholly to someone else’s plan. For many men, the thought of coming home from a day at the office, only to be pressured to make more decisions, sounds exhausting. Instead, they look forward to when their woman comes home and tells them it’s time to cook dinner, rub her feet, clean the house, or give her pleasure. It’s liberating to relinquish control and give in to her every desire.

Some men are also deeply turned on by humiliation.This health form of sexual expression is common. Many people relish consensual degradation, and in a female-led relationship, some men find themselves serving their wife and her lover drinks, or maybe just cleaning the house in the buff while their woman reads on the couch. For these men, the line between eroticism and embarrassment is deeply rewarding.

It’s worth mentioning too that humiliation and shame are cousins of guilt. Although there are deep chasms separating these emotions from one another, guilt absolutely plays a role in why some men want a female-led relationship. These days, many men are overwhelmed by the benefits they receive every day from male privilege. For a lot of them, the tremendous ease with which they wade through the world contrasts harshly against the ways they know their wife or girlfriend is treated daily by the outside world. A female-led relationship helps them, in some ways, flip the script and reject the notions that have been pushed on them for their entire lives.

To be clear, there’s nothing inherently villainous about a man who was born into a system of privilege (it’s what someone does with the privilege that’s the issue). When a man is facing sadness about his dynamic with the world, relinquishing the literal and metaphorical keys to the castle can open doors to intimacy and joy.

Does it always have to be a full-time dynamic?

Like all kinds of kinks and relationship styles, the great thing about a female-led relationship is that it doesn’t have to be permanent or full-time. For many folks, this arrangement only unfolds at certain points in the day, or within specific relationship parameters.

Everyone is different. You and your partner may decide that a female-led relationship only works for you on the weekends. Or, you two may decide that this kind of dynamic works best for you two in only a few situations, like sex and chores, or finances and punishment. The only way to figure it out is through ample communication and experimentation – you’ll find the right balance as a team.

Remember: a female-led relationship only functions when consent is given the front seat.

It can be really fun, satiating, and world-rocking surrender to a fantasy. Dom, sub, or vanilla as they come, we all love to give ourselves over to the moment and relish living in line with our desires. For some men, diving headfirst into a female-led relationship may feel like a dizzying tumble down a rabbit hole they have no wish to escape from.

The thing is though, no matter how dominant one partner is, a healthy dynamic means there’s always a way to get off the right when it starts spinning too fast. With a female-led relationship, it only feels so good because consent is embedded into it, helping it thrive. When entering any situation that deals in domination and submission, consent (and safe words) are vital.

A female-led relationship is no different. Even if you only dabble in it, there still must be some understanding between both parties, and a space in which the man is free to advocate for himself. To make it work, safe words are essential, especially as two people explore a dynamic they’re both inexperienced with.

On top of safewords, a good way to make sure both parties are happy is to have regular check-ins with one another. If you’re in a new female-led relationship, try scheduling a mini-meeting at the end of the day, or weekly, to see how things are going. Structuring a safe space where both partners can talk about how they’re feeling can go a long way in crafting something meaningful that lasts.

You can have a satiating relationship.

If you’ve been searching for a new way to approach your love, a female-led relationship may be what you’ve been missing. Start doing some self-interrogation and reflect on how the fantasy feels in your palm. With a few tender conversations, you and your partner might just find that it’s just what the (female) doctor ordered.

Whether we acknowledge it or not, patriarchal culture has forged our relationship to the seat of power. For too long, straight people have entangled themselves in strict rules and norms. We’re all fed this myth that there are only two modes of being, and that there is only one way a man or woman should present to the world – especially when it comes to love. One of the only consistent privileges we queer people hold over straight folks is that we know there’s another way to approach how we relate to lovers. So straight folks, jump on in; the water’s fine. See how it feels when you rearrange the guidelines of your love.

If you’re in a female-led relationship, let me know what your favorite thing about it is in the comments below!

The post Is a Female-Led Relationship (FLR) Right for You? appeared first on Volonté .

Intimate Tickles found this article quite interested, and we thought you might to. We give all the credit for this article to Nikita Andester. Click Here To Read This Article From It's Original Source