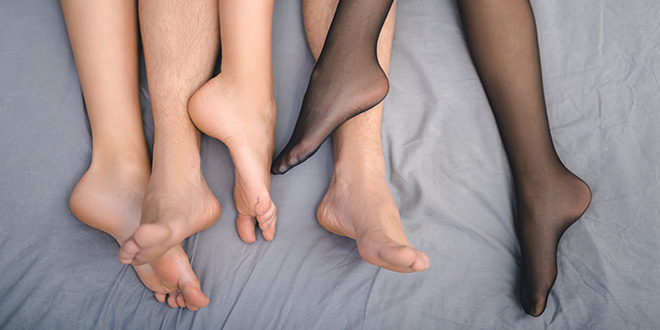 I changed my mind after speaking to several women who had had fmf threesomes, either with a male partner or friend, or as a single woman joining a couple. They all described fantastic, empowering, fun and even romantic experiences. The more I thought about it, the more I realized my knee jerk reaction came from a social place of shaming women – I had deliberately suppressed my sexual curiosity because I somehow felt it was ‘wrong’ of me to explore it. That, I realised, is not a very feminist thing to do.

We have since had several threesomes with different female lovers and, luckily for us, every time has been fantastic. These women have become good friends and our lives are incredibly enriched by knowing them.

Set boundaries and be specific. For example, are you happy for your partner to have full sex with the other woman or not? Is wearing a condom non-negotiable? Will the other woman sleep over or not? Try to think through all the situations that might arise, imagine how these would make you feel, and take it from there. Think about why you feel the way you do. If you feel uncomfortable about something that your partner is fine with (and vice versa) it’s really important to be able to break it down and explain.

So, if you plan to go ahead, here are some tips (learned from experience) for making sure you all have a great time.

Decide what you want

Are you looking for a one-night stand, a casual but ongoing thing , or a more serious poly relationship? Do you want to meet somebody new or reach out to a friend (I’d recommend the former, unless you’re confident your friend will be into it and won’t react badly to being propositioned)? Decide all of this right at the beginning. And when you start speaking to other women, make absolutely sure that they are on the same page. Do not, under any circumstances, be dishonest about what you’re looking for. That’s a one-way ticket to hurt feelings. And, frankly, lying to get someone into bed makes you a fairly bad person.

This might not seem very sexy. People seem to have a really bad reaction to the idea of planning when it comes to sex, but when you’ve got three people involved, believe me, it’s important. Think about where you’re going to meet. Do you want to just meet at your place or their place, or go for a drink beforehand? What day of the week works for everyone? Probably not a work night. Thinking about these things will help you avoid a lot of awkwardness.

The women need to talk to each other. A lot.

It’s important to establish that you’re compatible as people, that you can get along as friends, as well as sharing similar sexual desires (or, if they’re not similar, that they’re at least different in a way that’s going to work…). Also, jealousy is undeniably a factor when it comes to fmf threesomes – but by getting to know the other woman, and trusting her, you can shake this easily. Talk to her about what she wants out of it, trust me, it won’t be to try to steal your boyfriend.

I hate this term. If you’ve never come across it before, a ‘unicorn’ is a single person (usually a woman but not always) who joins couples for sex. Described as such because they’re allegedly impossible to find. A lot of single women describe themselves as unicorns, but what offends me about this term is that it makes that person feel like an asset, a sexual object. There’s also the implication that a sexually adventurous woman is somehow a rarity, which is just plain wrong.

Meet a person who you like and respect, call them by their name, and treat them like a human.

You are a three, not a couple plus a third

If you’re inviting another woman into your bedroom, the sex is between three people. It is not about you and your partner having a blast and treating the other woman as a kind of human sex toy. Just like how you and your partner talked and discussed your boundaries and turn ons , talk openly with the other woman. Find out what she likes, perhaps even more importantly find out what she doesn’t like (you might be really into toe sucking, for example, but don’t assume everyone else is).

Check in with her. It’s all about continuous enthusiastic consent. This doesn’t mean you have to do a load of stopping and starting or awkwardly asking questions the whole time (though an ‘Is this ok?’ now and then goes a long way). It can be as simple as ‘do you like that?’ Remember that consent is sexy. And when there’s a new person entering into your sex life, it’s important to figure out what everyone likes and to make sure that everyone is having a good time.

If you’re trying new things in the bedroom, it might go wrong. That’s ok. Don’t take yourself too seriously. Remember that whatever your sexual experiences are individually, you’re all still navigating the dynamic between the three of you for the first time.

Inviting a third person into your sex life is a great way to make new discoveries about your own sexual desires. If you’re having open discussions with a new person, inevitably questions should arise. Think openly about these and don’t be afraid to try new things.

Don’t be afraid to say no

Remember that you always, always, always, have the right to say no or to change your mind. This applies whether you’re doing something for the first time or have done it a hundred times but just don’t want to anymore, or just don’t feel like it at that moment. Maybe you felt comfortable with the dynamic to begin with, but suddenly your feelings have changed? Speak up straight away. Never bottle up your feelings or carry on whilst pretending you feel fine, if you don’t.

Likewise, make sure that the woman you’re having the fmf with also knows this and is comfortable saying how she feels. It would be easy, especially as a couple, to inadvertently pressure somebody into something. This could happen without you even realising (hopefully you aren’t doing it on purpose) so reminding that person that it’s always, without exception, ok to speak their mind, is really important.

Spend some time just hanging out

Spend a bit of time hanging out as a three doing vanilla activities like a walk in the park, a drink in a bar, or watching a movie . You’ll feel more relaxed around one another, and that will definitely lead to better sex.

It’s also a good idea to get out of the house after having sex, to hang out together and remind one another that you all get on, and there’s no awkwardness. Head out for a coffee, or brunch, or a drink (time of day dependent). Or if you’re saying goodbye, walk together to the train station/bus stop/car/bike.

Check in afterwards with a text or a phone call. You should have already discussed whether you’re looking for an ongoing thing or a one-night stand, but even if it’s the latter, it’s rude to leave someone high and dry. A simple message the next day, something straightforward like ‘We had fun, hope you did too’, is just good manners.

Set boundaries and be honest about them

You might have initially decided you wanted something super casual, perhaps even just a one-night stand, but now one (or, hopefully, all) of you have changed your minds about this. This is fine, it just means you need to keep talking and think about what parts of the dynamic you’re happy with and which parts (if any) make you feel uncomfortable.

If you notice feelings of jealousy or distrust arising, try to think very carefully about where those feelings come from. If they are well founded, speak to the people involved straight away. If you find they come from your own insecurities or prejudices, try to acknowledge this. That said, acknowledging an insecurity doesn’t always make it magically vanish, so it’s still important to communicate. But if you’ve established where your feelings come from it’s far easier to have a constructive and healthy conversation about them.

A final point. Don’t be surprised if people find your choices shocking. Although ethical non-monogamy is on the rise, and is being discussed more openly in the media, for a lot of people it’s still a lot to swallow.

If you do encounter people who are judgemental, try to think about any misgivings you may have had at the beginning. You were able to work through these, but not everyone finds self-analysis easy. Quite often (usually, in fact) people’s discomfort is rooted in their own insecurities. Put simply: their issue is a problem with themselves, not a problem with you. If you’re having sex in a healthy, happy, sane and consensual way, you’re doing nothing wrong. Don’t listen to anybody who tries to tell you otherwise.

Intimate Tickles found this article quite interested, and we thought you might to. We give all the credit for this article to Abby Moss. Click Here To Read This Article From It's Original Source