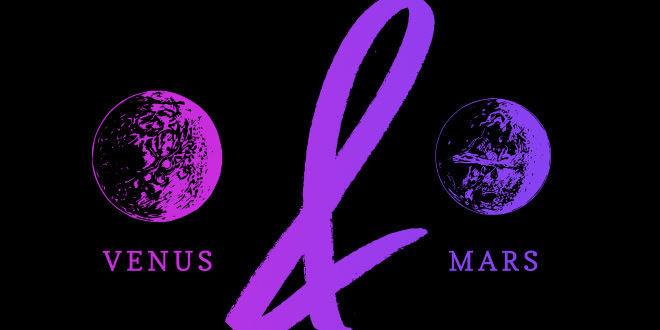 Are Men Really From Mars and Women From Venus? Androgyny, Explained

You’ll often find men and women cursing the opposite sex for one or other reason. “Men!” she may exclaim, after just having had her heart broken (and vice versa).

And so, we continue to tell ourselves that men are from Mars and women are from Venus… two totally separate entities that are so indecipherable that they must come from different planets.

But is this really the case? The term ‘androgyny’ may make you believe otherwise. Well, psychological androgyny, that is…

What Does ‘Androgyny’ Mean?’

The word ‘androgyny’ comes from the Greek words, ‘andro’ meaning man, and ‘gyne’ meaning woman. It’s when one person holds both male and female characteristics (or adversely, neither male nor female). There are two kinds of androgyny, physical and psychological.

What is Physical Androgyny?

Physical androgyny is when someone holds physical traits that makes their biological sex hard to decipher due to the way in which they represent themselves.

Someone who identifies as physically androgynous often adapts their clothing style and appearance in such a way that their biological sex is unclear.

An example of physical androgyny would be that of the late Michael Jackson, David Bowie, and Prince.

For those who are physically androgynous, there’s been a huge rise in fashion brands that actively celebrate androgyny. Today, it’s not so much about hiding or disguising gender, but more so about embracing where one lies on the gender spectrum .

What is Psychological Androgyny?

Psychological androgyny is when one person exhibits both masculine and feminine characteristics.

According to Mihaly Csikszentmihalyi, Psychologist and author of Creativity, the Psychology of Discovery and Invention :

“Psychological androgyny is a much wider concept, referring to a person’s ability to be at the same time aggressive and nurturant, sensitive and rigid, dominant and submissive, regardless of gender. A psychologically androgynous person in effect doubles his or her repertoire of responses and can interact with the world in terms of a much richer and varied spectrum of opportunities.”

With that, an example of a man who is psychologically androgynous is one who is able to lift heavy weights, change a flat tyre, and watch football with the guys whilst enjoying activities like cooking, reading poetry, and gardening.

An example of a woman who is psychologically androgynous is one who works as a mechanic by day, enjoys competitive sports like wrestling, yet loves finding interior decorating inspiration on Pinterest in the evenings whilst taking a bubble bath and drinking pink wine cocktails.

In both of these examples, there is no limit when it comes to adapting. Both examples are able to control and adjust their behavior accordingly, and neither feel constricted in their nonverbal communication .

Androgyny and Sexual Orientation: Are They Linked?

In no way, shape, or form is being androgynous synonymous of being a certain sexual orientation. Someone who is androgynous is no less masculine or feminine when it comes to sexuality than those who adhere to strict gender roles.

Androgyny: How Far Have We Come?

This scale was in no way multidimensional, with masculinity at one end of the spectrum, and femininity on the other end. This essentially meant that one person could either be masculine or feminine, and not hold traits true of both sexes which, back then, indicated that someone was mentally healthy.

When the 70’s rolled around however, professionals began to question this scale, and a new test was brought about by American psychologist, Sandra Lipsitz Bem, called the Bem Sex Role Inventory (BSRI). This scale was used in such a way that it was able to assess masculinity and femininity as separate dimensions.

In this way, a participant could walk away with one of four results:

While the acceptance and understanding of androgyny is still fairly new, the 80’s was rife with celebrities who welcomed physical androgyny. Musicians such as Boy George, Annie Lennox, Elton John, Madonna, and Cyndi Lauper actively embraced androgyny, and were praised by many for it.

Cyndi Lauper, for example, was named one of the Women of the Year in the magazine, Ms. in 1985 “for taking feminism beyond conformity to individuality, rebellion, and freedom”.

And while some may argue that these artists imbibed an androgynous appearance as a means to create a stage presence, they actually did make an impact on society. Androgyny in the 80’s encouraged people to think differently, to challenge gender stereotypes, and to question gender roles.

And while physically androgynous celebs may radiate creativity whilst twerking, dying their hair radical colours, and wearing outfits that challenge gender roles, this does not necessarily mean that they are psychologically androgynous. In fact, the motives behind their fashion styles may simply be for the sake of fame.

In 2002, James. B.Hittner, P.hD, and Dr. Jennifer.R. Daniels, conducted a study to measure levels of creativity in androgynous and nonandrogynous individuals.

In fact, Maslow too commented on creativity by saying that creative individuals often have a healthy balance of opposites, such as work-play, maturity-childishness, thinking-feeling… just like that of psychological androgyny.

It’s also interesting to note that after 1980, creativity was not only linked to individuals who scored an IQ of 115 or above, but also those who were psychological androgynous.

Having said that, creativity and androgyny are not necessarily directly linked, but rather an outcome of an individual possessing positive traits that are both masculine and feminine.

And, as Csikszentmihalyi puts it, “It is not surprising that creative individuals are more likely to have not only the strength of their own gender but those of the other one, too.”

For those who identify as psychologically androgynous, here are a few positive things that they may experience:

In short, it’s a great time to be alive! Society is becoming more and more accepting, more educated, and more open to discussing gender roles, and sexuality.

So even if is all just a big celebrity show, if Adam Lambert wants to rock eyeliner, and Miley Cyrus wants to wear ‘boyfriend’ jeans and have short hair… go for it! Because even these small acts of physical androgyny contribute to a bigger conversation that’ll inevitably lead to more understanding and embracing of individuality.

The post Are Men Really From Mars and Women From Venus? Androgyny, Explained appeared first on Volonté .