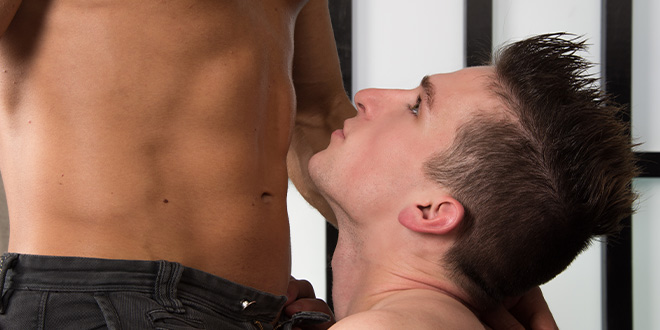 Their eyes met from across the room. He blushed as he looked away, and Nick realized that he had been staring at him. His shirt tightened and showed his muscles rippling beneath it as he tugged at it, clearly uncomfortable with the knowledge of Nick’s gaze. Nick shook himself. What was he doing? Spending a party staring off at this guy? He laughed at himself and turned back to the conversations and laughter around him, joining in and chatting with his friends.

Guests were trickling out as the party came to an end—having an homeowners association meant that parties had to be cut short. Nick ordered an Uber, and to escape helping clean up, he headed out to the front porch to wait.

“Hey! Can’t believe the party’s over so soon, huh? I’m Blane.” He smiled, leaning casually against the railing. What were the chances that it’d be the guy who had caught him staring at him earlier? “Yeah, the night is still so young! Nick.” He smiled and wondered if he actually had a chance to take this somewhere. “What are your plans for the rest of the night?” Blane laughed. “I hadn’t gotten that far, just figuring it out as you go, you know?”

“Hey, want to come back to mine and grab some beers? I wouldn’t mind some company tonight.”

“Sure! That sounds great. What kind of beer have you got?”

“I have a few kinds around. All of my friends have different tastes. It’s all we ever fight about.” Blane laughed at that. “Isn’t that the truth! Well, this sounds like a plan.”

“You bet! The Uber should be here in less than a minute, and then mine isn’t far, maybe 15 minutes.”

“Perfect! The sooner I get that beer the better.”

When they arrived at Nick’s place, he had to remind himself to not get too excited. Blane had agreed to come over, but that didn’t mean he was interested in more. Nick grabbed the beers and led them out to the patio in the back, where Blane spread out in one of the reclining lounge chairs and looked up at the stars in amazement. “I have got to get a set up like this! I don’t think I’ve ever sat down and really appreciated the stars like this.” Nick couldn’t help but notice how trim

and sexy Blane looked while reclined, his form clearly embossed through his t-shirt. “Yeah!” Nick replied, though he hadn’t really been listening.

He decided to go for it. “As amazing as they are, I have to confess I can’t take my eyes off of you. You’re beautiful.”

Blane sat up and leaned towards him, his eyes sparkling and a smile spreading across his face. “Being compared to the majestic expanse of the night sky? I’ve never felt so desired.”

Nick felt his arousal swell, as he finally acknowledged the pull he had felt toward Blane all night.

“I’m a guy who likes to please,” Blane said. “Whatever you want to do to me is yours to take.”

Nick paused, taking a moment to mentally slip into a dominant headspace. Then he stood up. “I want you to kneel.” Blane complied, “yes Sir,” and felt a wave of pleasure and excitement wash over him as he lifted his head to look up at Nick’s powerful stance. “Now take off your shirt.”

As Blane removed his shirt, Nick’s breath caught as Blane’s glistening pecs and abs were revealed. His body was lit only by the moonlight, and the deep shadows only made his cut torso look even more desirable. He felt his cock swell, making a visible bulge in his jeans. Nick bit his lip, trying to maintain his composure. Blane’s eyes went to the bulge, and he leaned forward eagerly.

“Oh, no. You want to give me pleasure? You’re going to have to beg for it.” Nick wanted more than anything to feel Blane’s mouth sucking his hard, throbbing, cock; but he wanted to make Blane work for it so he would be even more desperate when he finally was allowed to take Nick’s cock in his mouth.

Blane moaned softly in frustration. To be degraded like this? To have to ask for the privilege of sucking Sir’s cock? But he wanted so badly to put that cock in his mouth. He forced the words out. “Sir, may I please have the privilege of sucking your hard cock?” He felt himself getting hard through the feeling of shame as he looked up at Nick, completely submitting to him.

Nick smiled smugly down at Blane, slowly starting to open his belt buckle teasingly. He smirked as Blane leaned in again, almost moaning in anticipation of what was next. But Nick paused, and Blane let out a moan, looking up at Nick with desperate eyes. He wouldn’t make him ask again,

would he? Blane felt himself flushed with arousal, trembling with a mixture of frustration, fear, and pleasure.

“You’re such a little slut,” Nick growled, reaching out to grab a fistful of Blane’s hair. Blane yelped in surprise, the combination of the words and the pain startling him into shock. “Yes, Sir” he said quietly, leaning into Nick’s aggressive grasp on his hair.

“I want to see you completely naked in front of me,” Nick ordered. Blane quickly obliged, stripping off his shoes, socks, jeans, and underwear. “Now kneel again.”

As he looked down at Blane kneeling in front of him, stripped naked and vulnerable, Nick could no longer resist. He unbuckled his belt and unsheathed his aching cock, moaning as it sprung free and erect. He shoved it into Blane’s open mouth, and groaned in a moment of pure pleasure as Blane began vigorously sucking and stroking his rock-hard cock.

Nick took a moment to just savor the waves of pleasure crashing over him as the tension that had been building was finally being dissolved by Blane’s strokes. Even as his desires were being satisfied, he felt an even deeper urge rising up within himself. Once again grabbing Blane’s hair with both hands, he shoved his cock deep down Blane’s throat, groaning in pleasure. Blane struggled unsuccessfully, but Nick just shoved his cock even deeper with his next thrust, and continued to fuck his mouth relentlessly.

Blane gasped and tried to speak through the massive amount of cock in his mouth, but he was unable to escape Nick’s control over him. With Nick’s strong hands grasping his hair, Blane was completely helpless and at Nick’s disposal to use him. Nick moaned again. “I can’t believe how hot you are,” he gasped as he continued to use Blane’s throat. He was struggling to keep it together, when Blane shoved himself even further onto Nick’s cock. Nick could no longer hold back and he finally exploded, shooting his cum directly down Blane’s throat while his cock throbbed and he gasped and panted.

After a few seconds, Nick’s breathing started to slow again and he pulled his cock out of Blane’s mouth. “Fuck.” He tried to regain his composure enough to speak. Blane got off his knees and sat on one of the chairs, spitting into the grass. “Blanket?” Nick, still unable to form words, nodded and headed quickly to the house.

He returned with a flannel blanket a few moments later, offering it to Blane. “Join me?” Nick finally felt his head starting to clear, and gave a little laugh, “yes, absolutely.”

Nick laid down next to Blane in the grass, and Blane pulled the blanket over them as they touched skin to skin. “You’re right, the stars really are beautiful. I don’t think I would have noticed if you hadn’t pointed them out.”

Blane laughed. “I didn’t even remember that I said that. That was so amazing.”

“It was. You’re amazing,” Nick sighed, closing his eyes. “Do you want to stay the night? I’ll make you breakfast in the morning, anything you want. And if it’s something I can’t make I’ll order it in.”

“Sure,” Blane laughed. “Why would I leave now when I can stay here and enjoy you and the stars?”

“Exactly!” Nick smiled. “There’s so much beauty tonight, let’s just enjoy the rest of the night together.”

Intimate Tickles found this article quite interested, and we thought you might to. We give all the credit for this article to Princess Mazulis. Click Here To Read This Article From It's Original Source