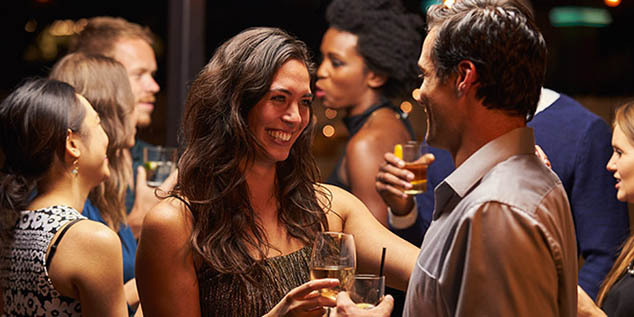 The time has finally come – You are ready to make moves and attend your first ever play party. Congratulations! That is a huge step in feeling yourself and your sexuality. But now that you know what you want (what you want is to attend an event wherein a group of people engage in consensual sexy and kinky scenarios with one another) there is SO MUCH TO CONSIDER!

Let’s start with the basics – as someone who, at this juncture, has made it at least as far as deciding you want to be in a play space, it feels safe to assume you might have some idea of what that looks like for you. Great! What a great start to an amazing journey. Now you just need to know where you will even explore all of that. Ask yourself the following –

Who do you want to play with?

Do you want to go to a party where you know some people? Do you want to know most of them? Or would you prefer it be strangers? For more private parties held at peoples homes or private rental spaces, it is commonplace to have someone vouch for you, to keep the space safe and only including people who have been given the seal of approval. This ensures a safer environment for those involved, but can be a more difficult place to break into the play party scene, as someone who has never previously been a part of it.

For more public play spaces, like sex clubs and larger kink festivals , you could potentially enter that space not knowing a single soul. If anonymity is your goal, this might be the route for you. The downside of these spaces is that essentially anyone who pays the amount to be there can be there, so you aren’t quite guaranteed the safety you might hope for. But even still, dungeon masters (DM’s) are present at all parties to ensure safety, to the best of their ability, and available to flag down should you experience an uncomfortable thing or find yourself feeling unsafe.

Are you looking for particular theme nights? Something thats specific to couples or to just women or to just queer people? Check your local clubs websites, or scope out fetlife (the social network for kinky folks) or local kink groups on facebook for what you are searching for.

Where do you want to play?

As mentioned above, the people you encounter depend on the space. Are you looking to keep things cozy and casual? Parties held at peoples homes tend to have a certain amount of intimacy to them that you just do not get at public spaces. Depending on the type of play you are looking for, a party at someones home can be a nice intro into play spaces, because it tends to be a more catered grouping of people, more intimate in its nature, and a space that feels more like a bunch of friends hanging out as opposed to a wild sex rager.

If you are looking to go hard, go for anonymity, or want access to more kink-specific gear that wouldn’t be available at most house parties (like hard points for suspension, St. Andrews cross, cages, etc) then a public play space might be for you! Many major cities have spaces like this – they usually require either a membership or a payment of some sort, usually have a bar, and often have various theme nights!

Once you know where and who, you are ready to get yourself into the play party spirit! With the night approaching, it is important to prep yourself. Hydrate and eat before the big day – think of all the energy and adrenaline you’ll be burning through! Avoid the post-party crash with some pre-fuel.  You also have to prepare mentally for one of the most important components to making your play party experience grand: clear and considerate communication .

Showing up to a play party hoping people will just know what you want and offer it to you freely is not going to bring you good results! Coming into the space already knowing what you might want (even if it isn’t fully realized!) is key! Relying on others to do the heavy lifting and communication for you is not something that should be expected – as a participant in a play space, you need to be able to communicate your desires, especially if you are entering with the idea that you will be engaging exclusively in pick up play, the act of negotiating a scene with someone you only just met in the space. Even if your desire is, say, to just check the scene out and get a feel for what is going on – that is chill!

You also need to be able to hear and say no, and know what explicit consent means. If someone says “I guess”, take it as a no. If someone seems hesitant, do not push them for a yes. If you do not receive an enthusiastic YES to a proposition, take it with grace and thank the person for their time. After all, just because everyone is in the space for the same general reason, it does not mean everyone is there because they want to engage in the same kind of play as you, or are just down to do whatever with whomever. Some folks are just there to be voyeurs ! Do not be afraid of saying no either – you are not required to play with everyone just because you signed on to being at the play party.

Not sure where to start when it comes to communicating with someone? Afraid of even approaching first? Understandable! It is an overwhelming thing and also entirely up to you to be able to make those moves. Make moves! Tell someone they’re hot! Tell them they were so good at hitting someone earlier, or you loved the way they did A, B and C! It might feel high stakes, but honestly, it is the best possible low-stakes environment to compliment someone and engage this way. People in play space know how to ask for what they want, and if they aren’t interested, they’ll let you know! Need some basic communication tools to use if someone is interested in playing? I am here for you!

While communication is a massive part of the play party experience, there are quite a few other rules of the play party road. Don’t worry – once you’re in the swing of it, it is all quite easy to follow along, so long as everyone around you is following the same rules. Keep in mind that every party has different rules depending on the space, the group, the theme, etc. Regardless, some general rules of the road to follow are the same for every space.

Don’t interrupt a scene: if you see folks playing and you think their scene looks like one you’d be into, thats awesome! But that doesn’t mean you should invite yourself in – things have probably (hopefully) been pre-negotiated between the folks involved, and you were not a part of that negotiation! Give them their space, let them finish out their scene, and maybe later you can discuss with some of those folks setting up a scene similar to that one. But PLEASE, do not be the person who thinks it is a free-for-all where you can just jump in at any moment! That is not cool, and crosses just so so many consent boundaries.

Lastly, the often forgotten component in any play space (and honestly in sex in general) – aftercare ! Imagine; you and a babe, maybe even multiple babes, have just engaged in a totally dreamy scene together in front of a plethora of party goers. You finish up your scene and at the end you all just… walk away. Not great! Not ideal! Aftercare in play space especially is SO important. You all just shared a very intimate moment together in a public space. Ask your scene partners what they might want/need out of their aftercare during negotiation for the scene, before you even start playing. Aftercare can look like holding each other, rubbing backs, just drinking water and winding down with your scene partner, etc. There is no one way for aftercare to be, and not everyone necessarily needs it, or maybe they have someone who they want to share that moment with that isn’t you. Totally cool! But asking is so important – leaving a scene without aftercare can make or break an interaction for some. Don’t forget to think about your needs too!

Got it? Great! Once you’ve arrived and things are rip-roaring, it can get a little overwhelming to navigate and remember everything! Don’t beat yourself up if you mess up – of course be conscientious and be willing to hear feedback, but don’t think this means you can never be in a play space ever again. Learn from your mistakes and your experiences – Play party brain happens to us all. But as long as you remember the above, you should be golden. Be safe, have fun, take care of yourself and the people around you, and make your hottest dreams come true!

Intimate Tickles found this article quite interested, and we thought you might to. We give all the credit for this article to Courtney Kist. Click Here To Read This Article From It's Original Source