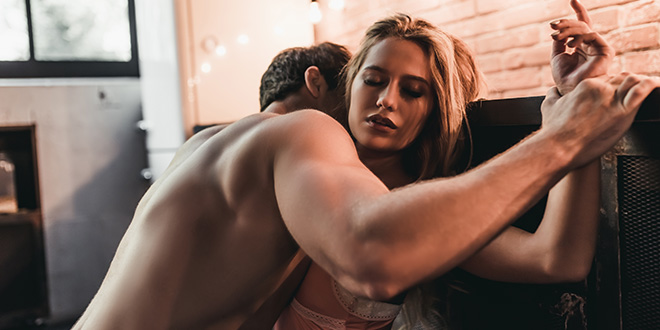 Corey glanced up as Jackie banged another mug into the dishwasher. “You trying to break something?” he said mildly from the living room.

Jackie paused, soapy hands dripping onto the counter. “Sorry. It’s just-” she gestured vaguely over the sink. “The everything.” She shot him a dagger-eyed look as the corner of his mouth rose in a lopsided, impish smile. “Shut up. Unless you’ve got some socially responsible plan to get me laid, don’t even say it, I am so aware I need it.”

Corey ran a hand through his dark hair, which had grown out in the past eight weeks to a hint of soft curl. “I’ve gotten predictable in my old age.”

Jackie dropped a bowl into the top rack. “Watch out, I might accidentally channel my sexual frustration into your flatware next.”

Corey dropped his arms over the top of the couch. It was a good look for him. He was a gym rat in the Before Times and had become an ardent living-room exercise enthusiast since the first shelter-in-place orders. “I can think of better channels but chase your dreams.”

Jackie cleaned two pans and a particularly nasty pot of congealed oatmeal before she caught on. She turned, head cocked. “Did you just hit on me?”

He lifted a shoulder, drawling. “I’m just looking out for the best interests of my flatware.”

Jackie grabbed a flower-print towel and dried her hands to stall for time. It wasn’t like she’d never thought about it. He was a chill dude. He pulled his weight around the apartment. He’d never been weird or creepy in general, or specifically about her being bi, an absolute rarity. Shit, even her mom liked him. “Ha,” she said. “You’re laidback but I bet you’re bossy as fuck in bed.”

“Honey,” said Corey, mouth dancing, eyes half-lidded, “we use the same Amazon account.” He set aside his laptop and stood, thumbs hooked in his belt loops. “Your book recommendations suggest you’re very into bossy in bed.”

She’d completely forgotten that. If she blushed any harder she would set the apartment on fire with her face. Jackie swallowed as Corey strolled over. “Ah,” she managed. “What if I said it was for science?”

He stopped arm’s-reach away, blue eyes snapping with humor. “Well,” said Corey. He traced his fingertips over her bare shoulder, slipping his fingers into her long, pale hair. A line of goosebumps broke down her arms. Corey drew his fingers into a fist, securing a firm handful of hair, tipping back her head and exposing the delicate sweep of her throat. Tingles split across her scalp, delving down her spine and straight to her pussy. Jackie sagged back into the counter, mouth parted around a throbbing, needy inhale. Corey leaned in, lips brushing her ear, voice low. “I guess I’d call you a liar.”

“Fuck,” breathed Jackie. Her knees were water, her mouth dry, aroused so quickly it hurt.

Abruptly, Corey released her and stepped back, shrugging. “But, you know. Just a guess.” He glanced at the remaining dishes. “Good luck with those, I’ll just be back over-”

“I – you – motherfucker-” Jackie stammered. She grabbed a handful of his t-shirt and hauled him in. His mouth closed on hers, warm, the barest trace of stubble, chest shaking in a laugh, hands settling on her hips and drawing them flush with his, sweeping across the curves of her ass with an appreciative squeeze. He had the sweet-tart taste of iced tea, the fleeting scent of pine and musk, and he devoured her mouth, broad palms slipping under her tank top, hot on her skin.

After a delirious time – minutes? hours? – of roving hands and mouths, Jackie so aroused she might vibrate out of her skin, Corey drew back, voice husky. “You trust me?”

Jackie blinked, dizzy, nodding emphatically. He spun her around, pinning her arms with one of his, tipping her head back against his chest with his free hand. “You’ve been so goddamn stressed lately.” He nipped that sensitive spot behind her ear just hard enough to sting, and she whimpered. “Just fucking relax for a while.” He trailed his fingers down her torso, slipping them into the elastic waistband of her athletic shorts, into her panties, voice steel wrapped in velvet. “Stop worrying about everything.”

“I haven’t been that-” Jackie broke off as he touched her, drawing his fingers through her folds, caressing her clit. “Fuck.”

“If you want to argue,” said Corey lowly, circling her entrance with one finger, “I can stop.”

A second finger, tracing, tormenting. “I didn’t hear a please in all that.”

“Please, fuck, Corey-” Jackie moaned as he slipped into her, base of his knuckles pressing against her clit. Shamelessly she ground against him, his grip on her arms firm, bracing her as pleasure built deep in her core.

“Just like that, baby girl,” said Corey. He caught her earlobe in his teeth and sucked gently as he slipped a third finger inside her. “Fuckin’ ride my hand.” He drew up his thumb to circle her clit in tight little circles. Her whole body shuddered. She felt so good, so full, ready to burst. Jackie felt the heat rising like a great ocean swell, foaming at the edges, waiting to crash down on the beach. Her breaths came in quick bursts and then Corey did something with his fingers, brushing up inside her, and the orgasm slammed into her. Pleasure rolled up her torso as her breath came in a long, high moan, Corey drawing out every last ripple with his fingertips. He slipped both arms around her waist, holding her steady as she caught her breath, basking, swimming in hazy contentment. “Now,” he said softly, “will you leave off my fucking dishes?”

Jackie giggled once, nudging his stomach with her elbow. “Jackass.”

Intimate Tickles found this article quite interested, and we thought you might to. We give all the credit for this article to Alex West. Click Here To Read This Article From It's Original Source