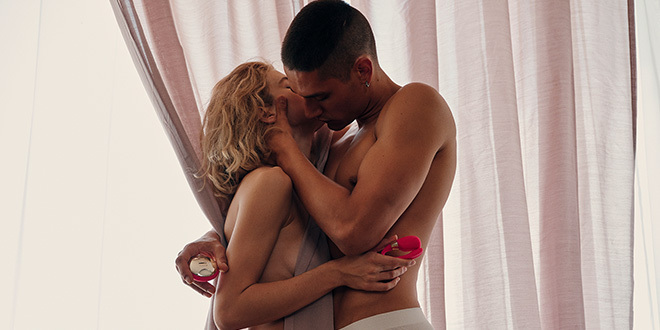 We believe that all the buzz surrounding vibrators are completely valid, and that these nifty sex toys deserve the spotlight. They’re great for all kinds of occasions… like solo play, couples fun, intense foreplay, and more, making them a versatile treat in the bedroom.

On the other hand, perhaps you’re not at all intimidated by them, and you’d love to start using them during play time with a partner… fair! The first step? Ask and you shall receive!

Note: this article has been written in such a way that it is addressed to heterosexual women, yet is informative for both men and women.

As sex expert, Dr. Kat Van Kirk, Ph.D says, “One partner may fear that another partner’s use of a sex toy will replace them or that they’ll become overly reliant on them for arousal and/or orgasm.”

So, how could one fix this issue? Positive communication . Before you whip out your fave toy, you’re probably going to want to chat to your partner first.

Frankly, the whole concept of feeling ‘less than’ is kind of absurd, as a scientific study found that 75 percent of women don’t achieve orgasm during intercourse alone. Men, on the other hand, are way more prone to orgasm during penetrative sex.

But don’t just take our word for it! David Freerick, Ph.D, conducted a study in 2016 that says that men and women who were satisfied in their relationship and with their sex life were more likely to use sex toys together.

So at the end of the day, what has the power to enhance foreplay , and sex, exponentially? Vibrators!

You can turn it on to a low setting and simply run it over their body to find a spot that really tickles their fancy. As the pleasure builds, you can move it towards their intimate parts, over the underwear, which will most certainly get the party started.

4. Getting Him On-Board… to Get Off

Use your toy on a low setting and glide it over the area. This will bring about intense pleasure due to the fact that it is so near to the internal prostate gland.

You could also start stroking him as you do this, which could lead to one intense orgasm, or possibly even multiple.

Did you know that there are vibrators made specifically for men? Yep! And they’re pretty damn fantastic too! No more feeling left out, fellas… meet Hugo, Loki Wave, Billy 2, and Bruno!

Hugo is a friend for him that’s hands-free and remote-controlled. What does it do? Massages the prostate in such a way that the orgasm experienced can be intensified by up to 33 percent.

Don’t believe us? Check out how powerful a male’s orgasm can be when the prostate is stimulated in this blog !

This prostate massager vibrates back and forth, which optimises its ability to stimulate the most sensual parts of the male anatomy.

It also offers external stimulation (on the perineum), making it a pretty well-rounded toy, with 10 stimulation modes. Play nice!

Want to move things into the shower? Billy 2 is a waterproof prostate massager that’s tapered, making it easier to insert. It’s comfortable, made of soft silicone, and comes with eight vibration settings.

We recommend Bruno for beginners, as it’s the perfect size to start with.

So! What did we learn today? That vibrators aren’t just for women, and that everyone can benefit from a little vibrator-play during sexy time!