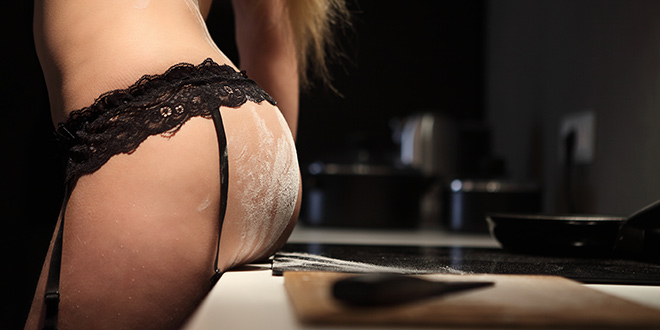 It was too hot in their apartment. It always was. The eighth floor and the 300 days of sunshine meant that as the heat rose, and stayed there, their apartment was a constant 80 degrees. With the oven on, the air conditioning wasn’t enough. Melanie stood in her kitchen, wearing only an apron around her neck and tied around her hips. Even with no clothes, her skin was still too warm.

The cookie dough she was mixing was nearly set, the second new recipe she was trying this week. But the sugary sweetness melting on her tongue after 12 minutes in the oven wasn’t the only outcome she was hoping for.

Her husband sat at his desk less than twenty feet away, noise-canceling headphones on, chatting on some business call. She had finished her workday already and was dead set on anything to distract her mind from spreadsheets and screens. She was hoping the scent of chocolate in the air would be enough to convince him to end his day too.

He hadn’t seen her take off her clothes or tie on the apron. His headphones had blocked out the sound of the mixer. But the smell of cookies in the air? That was going to work in her favor.

She dolloped out twelve cookies onto the baking sheet and placed them in the oven, then waited, bending herself over the kitchen counter in anticipation.

“Do I smell cookies?” He asked, headphones gone, walking into the kitchen.

“The Coconut Cookie Challenge? Is making them the challenge?”

“Not exactly,” Melanie said, turning her back to him.

She bent over, looking into the lit oven, acting as if she was checking on the cookies’ progress.

She stood up, and turned to face him, one hand sneaking down toward the edge of the apron. “Maybe you’d like a little taste?” she asked.

He moved closer, placing his hands on her hips before lifting her onto the countertop. He pulled the apron up her thighs, unveiling her slick wet lips, a mixture of her own desire and a layer of coconut oil. He spread them apart slowly with two fingers, and lowered his face, keeping his grip on one thigh tight.

Melanie stretched her thighs further apart and moved closer to the edge of the counter, as Dan flicked his tongue out, licking her from bottom to top, just barely flicking her clit, causing her to grip the counter with both hands and thrust her hips.

“Mmm” she whimpered softly, trying to grind her lower half into his face. His grip on her thigh tightened, his tongue coming at her clit with force, flicking up, down, around, and then sucking into his mouth.

“More,” Melanie released one hand from the counter and grabbed at his hair, longer than usual, with enough force to dig in not just her fingertips, but her nails, knowing how much he liked the pressure.

He alternated between licking and sucking. The more she writhed, the tighter his grip and the wilder his tongue became, until she loosened her fingers and drifted her whole body backwards onto the counter, the cool marble making her shiver as it hit her bare back and she gave in fully to the pleasure. Melanie knew how wet she was, she could feel the warmth running down her thighs. “Please,” she whispered.

The timer on the oven begin to beep. A loud, constant noise. Dan moved both hands fully to her thighs, as he pulled himself to a standing position. “One second,” he said, as turned away from her, slipped on an oven mitt, and pulled the cookies out of the oven to the stovetop before turning off the timer. Then he flicked the oven mitt off and turned right back to Melanie, who had her fingers rubbing circles around her clit while her other hand pulled the knot of her apron loose so she could reveal her breasts, and pull at one nipple, hard, with her other hand.

“No, no, we’re doing this together,” Dan said, undoing the button of his jeans with one hand and unzipping them, then pushing them and his boxers down his thighs. He moved her fingers away and replaced them with his own, feeling not just her clit, but dipping into her pussy with one, then two fingers and feeling how slick she was.

“You taste like a coconut cookie,” he said, taking hold of himself and pushing the head of his cock to her lips. He fully entered her, his fingers moving in a circular motion around her clit, as one hand held her flat, thrusting harder and harder.

Dan moved his hand from her thigh to her breast, pinching Melanie’s nipple from her own hand and holding it tight until she gasped. His cock pushed against that spot inside her, making her try to wriggle both from and to him, and he recognized the angle, pushing against it again and again, while his fingers continued their rubbing, pushing her to the edge.

“I guess you won the challenge,” Melanie told him, sweeping his release from her thighs with her fingers.

“Never underestimate how much I love coconut cookies,” he said, as he brought Melanie’s fingers to her lips, where she sucked at their remains until Dan moved in for a messy kiss.

Intimate Tickles found this article quite interested, and we thought you might to. We give all the credit for this article to Kelly Fletcher. Click Here To Read This Article From It's Original Source

← 4 Ways Sex Enhances Intimacy
Our sex life after the pandemic →