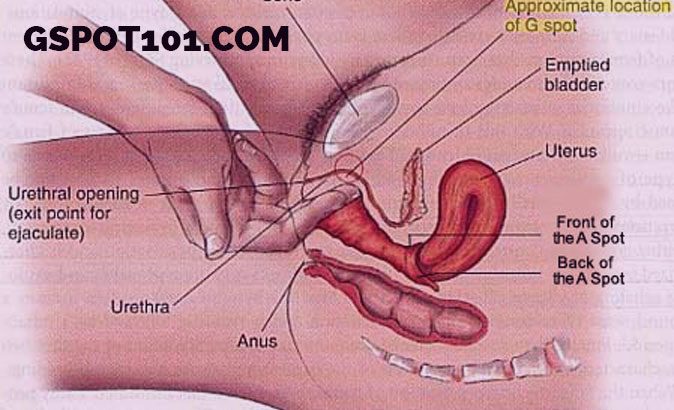 The role of the female G spot in the female reproductive system is a simple one – it exists to provide an orgasm. Medical scientists have conflicting ideas of how this area came to be in terms of evolution, but the reason it exists today is to provide pleasure and increase a woman’s odds of orgasm during penetrative sex.

The G spot is an area inside of a woman’s vagina that is filled with sensitive nerve endings. Much like the clitoris, it will engorge itself when a woman is aroused, and stimulation will often lead a woman to orgasm. Some believe that the nerve endings located in the clitoris come from the same place as those in the G spot, and while the G spot may be more difficult to find, it can lead to some earth shatteringly strong orgasmic sensations.

Theories On The G Spot In Reproduction

The role of the female G spot in the female reproductive system is a conflicted topic. Essentially, medical science has two theories as to what role the G spot has to play and how it is important to reproduction as a whole. The first theory has to do with ovulation, and how human women may have ovulated long ago in terms of evolution.

For other species of mammals, like rabbits and cats, stimulation is required for the ovary to release eggs. This means that in order for reproduction to happen at all, a certain level of stimulation must be reached. Nowadays human women don’t require any sort of stimulation to release an egg, as it’s all done on its own as part of a timed reproductive cycle. However, some scientists theorize that this may not have always been the case, and that stimulation may have once been a requirement for an egg to be present. These same scientists think that the G spot’s reproductive role was to provide this necessary level of stimulation in order for reproduction to occur. While this is no longer the case, the female body has kept the G spot and its pleasure feelings even if it’s not a “required” part of the body any longer – much like the tonsils or the appendix.

Another theory has to do with the female orgasm and its role in reproduction. Some medical scientists believe that the female orgasm makes reproduction more likely to be successful, while others disagree with this theory. The thought is that the contractions the female body goes through during orgasm work to pull sperm further into the body, essentially creating a “fast track” of sorts that gives the sperm a bit of a push to reach the egg. While an orgasm from the female is not “required” to procreate, it does move the process along for a bit of extra insurance. With the intensity of a G spot orgasm , this provides a lot of contractions to pull sperm further inside.

What We Know About The G Spot

While the exact role of female G spot in the female reproductive system may not be exactly clear, there are some things we do know for sure regarding the G spot. When stimulated, the G spot can produce incredibly strong orgasms through penetration, so regardless of its role in reproduction, exploration of the G spot is always worthwhile. For many women, a belief is held that penetrative sex doesn’t produce orgasm, but the reality of the situation may be that they simply haven’t found their personal mode of G spot stimulation yet. With relaxed and fun play, any woman can be capable of experiencing all of the magic the G spot holds inside.

Intimate Tickles found this article quite interested, and we thought you might to. We give all the credit for this article to gspot. Click Here To Read This Article From It's Original Source