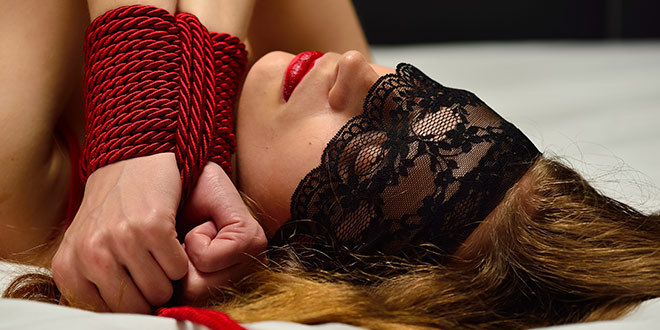 Now I know what you may be thinking: “You mean to tell me that someone who is literally bound to a point where they’re helpless equals feeling aroused and happy?” Yep, that’s exactly what I am saying. This is because, well, different strokes for different folks.

Like the way, your partner kisses your neck? Prefer to be more submissive during your sexual trysts? Or maybe you secretly love it when you’re able to dig your nails into your partner’s back during sex. Exactly.

What Does it Mean to Be Hogtied?

In the realm of bondage, hogtied means that a person (usually called a ‘sub ’ or a ‘bottom’) has their ankles and wrists bound behind their back.

It could also be when a person has their legs spread apart with each ankle tied separately. The latter then gives uninterrupted access to the nether regions.

In this way, their mobility is seriously compromised.

The person who takes the reins (usually called a ‘dom ’ or a ‘top’) is able to position the bound person as they prefer, giving them access to different body parts.

Where Did the Term ‘Hogtied’ Come From?

The original meaning of the word ‘hogtied’ pertains to pigs, and other four-legged animals. It’s when an animal has three of their four legs tied together which then prevents it from being able to stand, walk, or charge.

There are so many reasons why an individual may like the idea of bondage. Here are a few reasons why bondage is so appealing:

Some people love to have power, and some just want to feel as though they can let go. And this is how a dom-sub/top-bottom dynamic begins.

For those who enjoy feeling powerful and want to experience full control, binding another can bring a sense of pleasure and calm.

And for those who perhaps have high-stress jobs or are heavy decision-makers when it comes to day-to-day pressure, allowing someone else to take control seems blissful.

Some have admitted than when they’re bound, the feeling resembles a tight closeness, similar to that of a hug or embrace . It’s almost like a safe space.

For others, they may just love the idea of bondage solely because they enjoy the way that the rope feels on their skin.

There are tons of different ways to practice knot tying, and many are attracted to the mere sight of seeing the intricate rope detail. Some are also in awe of the time and skill that it took to produce it.

To roleplay is a way for adults to escape the drudgery of everyday life, and live out all kinds of fantasies. It’s also a way in which to let go of any guilt and simply play the part of which you are assigned.

Hogtying can be quite easy to do, but does involve being super careful and practicing safety first (more on that later).

Here’s a little step-by-step guide for those who fancy giving a simple hogtie a go:

Step One: One partner (the sub or bottom) lies on their stomach, the other (the dom or top) ties their ankles with a relatively wide double column.

FYI: What is a double column tie? Tying two column-shaped body parts together i.e. the wrists.

Step Two: Do a double column tie on their wrists too, wider than the ankles.

Step Three: Add a new rope inside the cuff of one wrist, then change the rope’s direction, and run it inside the rope of the other wrist. Tighten the bight.

Step Four: Let the tail of the rope run in between the ankles from underneath and bring it over. The tail will now be able to be wrapped around the standing line (the line that’s between the wrists and the ankles).

Step Five: If you’re using a short rope, you can end off the hogtie by tying a square knot. Longer ropes can be wrapped around the wrists and ankles a second time.

This is a given, no matter what the activity. But especially because bondage can be a very intimidating and perhaps scary thing for some, it’s important to have full consent from both partners.

This doesn’t mean only at the beginning, but also checking in on them throughout the play time. You could implement a safe word in this case, if that’s something you’d like to do.

If you are the partner who is being bound, it’s extremely important to listen to your body. If you feel any of the following, it means that you both need to decide that rope play is officially over:

Remember that any dom/sub or top/bottom relationship is based on mutual respect and understanding. And because you are now in control of your sub/bottom, it is your responsibility to look out for their wellbeing.

If you find yourself feeling intrigued or interested in experimenting with hogtying, I recommend doing more research on it and or speaking with others who can share stories of their experiences.

There are various other ways to experiment with hogtying, and there are different kinds of rope and props that can be used, so more research is strongly advised before playtime! Stay safe, folks!