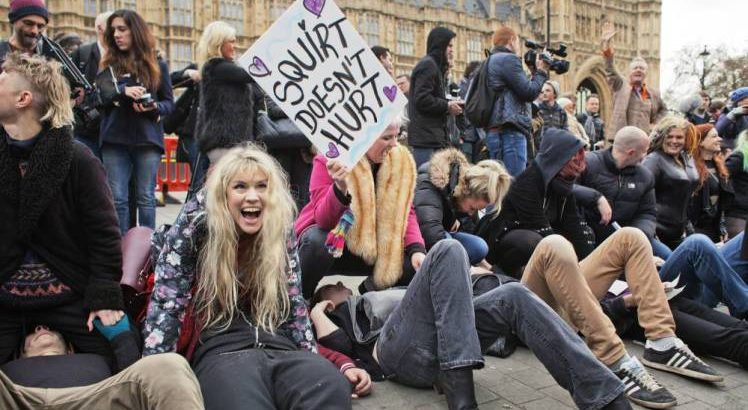 Posted in Blog, LELO NEWSWIRE, Sex in the News

This raised a lot of questions about the new regulations, and who had appointed themselves the new arbiter of human sexuality. But more to the point, people who were paying attention immediately raised the obvious point: why was female ejaculation deemed obscene, but male ejaculation remained perfectly acceptable?

If your answer to that question is ‘umm I don’t know,’ then congratulations, you’re qualified to be a regulator in the UK because they didn’t know either. When pushed on the issue of female ejaculation, they mumbled something about how it was probably pee anyway and then they changed the subject to whether milk should be poured before or after the water in a cup of tea.

But even that didn’t make sense. Even if it was pee, which it isn’t, the new guidelines also specifically banned the depiction of urolagnia too, so they knew there was a distinction or they wouldn’t have banned female ejaculation by name. It was all very frustrating and all the hurrumphing and hurrahing about it in Britain couldn’t change the law, which stands to this day.

Anyway, the point is that this legislation was a manifestation of a much wider and older cultural attitude that emphasises male pleasure above and beyond female pleasure in general, and the male orgasm over the female orgasm in particular. It’s an attitude so entrenched that it’s prevalent even in LELO’s industry, the pleasure industry. When we launched HUGO , a prostate massager and therefore aimed at a male market, we had no problem using the phrase ‘discover prostate milking’ and ‘experience a prostate orgasm’ in our marketing. But when we launched INA Wave , which was design at least in part to encourage female ejaculation, we began to struggle to get media to carry our ads. Why?

These are surely answerable, empirical questions, so why haven’t we answered them empirically? Why is there debate about it, even in scientific fields? Every. Single. Article. you read about female ejaculation will have something like ‘there is still scientific debate about the truth of female ejaculation.’ Why is that not a red flag? Imagine if the same attitude was taken to, say, lactation. ‘Medical scientists are still debating whether it’s actually milk, or just warm toothpaste that women are secretly concealing in their armpits.’ Well don’t you think we should FIND THE FUCK OUT?

If we can prove that theoretical, subatomic particles exist by inference and without actually seeing them, then how can various forms of perfectly natural functions of the bodies we actually inhabit still be mythical?

I know, I know. It just blows my mind. Imagine if we didn’t understand, say, sneezing. One day you sneeze, and you go to a doctor and say ‘I sneezed today, is that normal’ and they flat-out tell you that you didn’t sneeze, you couldn’t have, your anatomy isn’t capable of it, that it was probably just a cough, and then the government passes a law saying that women aren’t allowed to sneeze but men are allowed to do it everywhere all the time, they can LITERALLY SNEEZE ON SOMEONE ELSE’S FACE, but if a woman does it, she goes to jail.

And then flip the mattress.