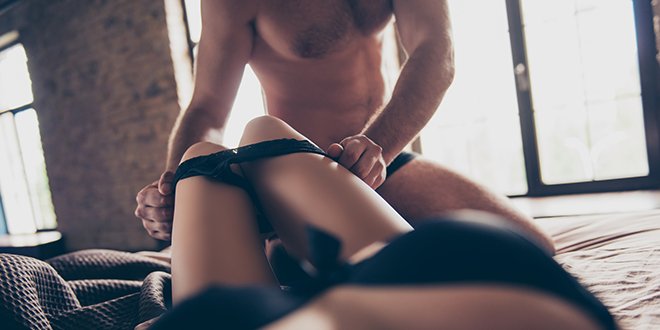 “Please… how much longer?”

The sound of the girl’s voice through the monitor may as well have been in the room with you. You pull the laptop a little closer, as if wanting to be even closer to the girl on screen, wanting to hear every breath, every pant, every sigh.

“Until you are crying with need,” comes the stern response from the man out of view.

Even with your lingerie embracing the delicate contours of your body, you feel as naked and exposed as her while you gaze longingly at how she lies spread eagled on the bed. You grip your wrist, feeling the gentle pulse of your heartbeat against your thumb as you imagine how those restraints must feel, securing you in place.

Perhaps her imagination was racing as much as yours right now. The thought of multiple hands caressing every inch, mouths seeking out all the places that could elicit the loudest squeals of joy. You think to yourself how her mind must have been alight, burning with desire, casting its white hot heat throughout her body, stoked further by the confines of the blindfold, adding so much more to the anticipation.

As the man on screen comes into view, you want to follow his actions, to touch yourself in the places where his fingers linger, wanting to feel the same sensations. His mouth leads a path down from her neck to her mound while his palms slide across her body, tantalising her thighs, her waist, her chest.

His lips trail around her inner thighs before teasing her sex, kissing and nibbling the petals of her delicacy, yet never giving the full contact that she is so desperately in need of. Even without all of the begging and pleading for more, the way her hips writhe and her back arches gives away how long this has been going on for, how often this pattern has been repeated. Over an hour of torment contained within a couple of minutes of wonderful visual agony for your own pleasure.

From the angle, it’s difficult to see the moment when he switched from constantly circling his tongue around her engorged clitoris, so swollen with the need for more, to sweeping left and right over the tip of it. If only you could see how much it twitched, yet there was no mistaking the moment when his lips finally clamped firmly over that aching little bundle of pure sensitivity.

She let out a wonderful moan that made you almost wish you’d have been the one to cause it. The man’s head stayed still while his hands held her hips, though you remain transfixed on her body, trying to make out every moment she trembles, every shudder, knowing that your own mouth would be agape just the same, frozen in bliss after wanting this for so long.

Finally feeling that mouth latch onto it, feasting on your pleasure, your soaking wet pussy and that slippery tongue engaged in the most passionate dance. You barely even register when she begs him to let her come, your mind’s eye is on that wetness, his tongue lapping away at that unmistakable token of pure arousal, imagining your pussy juices dripping down your ass cheeks.

Only her cry of frustration brings you back to her predicament on-screen. It had seemed like hours ago that she’d originally been asking for his permission to let her come, when his fingers were sliding back and forth over her pussy the way his tongue is. Now she had passed that point where playful teasing had become torment, every action and sensation was magnified tenfold.

You also know that no matter how many times you drive yourself to the cusp, no matter how many hours you spend enticing your pussy with an orgasm it won’t receive, you would not come close to the suffering that he’s making her endure.

Merely watching is agonising, yet it is taking every ounce of willpower to not give in and play with yourself while watching such a display of erotic cruelty. At one point, she pleads for him to show mercy and you are sure that she must be in tears of need. At this point he slides a finger inside her pussy while he continues to suck her clitoris. You want nothing more right now than to be her. Even though you are certain that you could not handle even half of the exquisite torture you are witnessing, you want to feel that helplessness, having someone in control who is devoted solely to exploring the deepest regions of your capability for pleasure.

He suddenly whispers to her, barely loud enough for you to hear, “Good girl, you’ve held back long enough. You know how much I love feeling and hearing you in such need. I can feel how desperate your little entrance is, the way it wraps so tightly around me. Does it wish this was my cock sliding back and forth? Just saying that made it clench even tighter… and again. You’re begging to come now, but very soon, you’ll be begging for it to stop. I promise you, I won’t stop. So you’d better decide now… do you want to come?”

Once again, he presses his mouth back against her delicacy. You want to be there so much, to have felt the heat wash over you like a tide of arousal and eroticism.

“Come for me,” came his sharp command from between her legs.

With that, she tenses in anticipation as the pleasure engulfs her, before throwing her head back against the pillow, her mouth open in a silent scream; complete ecstasy. Her body convulses. You want to feel exactly what she is feeling right now. While the orgasm tears through her, she pulls against the restraints to no avail, wanting desperately to protect her sex which you know has to be so sensitive.

His mouth continues to work her tirelessly, sucking and licking fiercely while the cuffs around her wrists and ankles keep her from pushing him away or shielding herself. She begins to tell him that she’s going to climax again, though there is no need to announce it as she lets out another squeal of rapture. Whether she had come again or not, you see that he is showing no signs of stopping or slowing down.

Her plea for him to stop, that it’s too much, would have certainly made you stop if you were the one in control. So tender, so sincere, yet it does not make him stop. Relentlessly he forced her to orgasm again and again. It almost frightens you to think of how much he must love coaxing this kind of response, as if feeding off of it. Clamping her legs together does nothing but trap his head in the same exact place.

Every muscle in her body strains against her bondage, there is no escaping that tongue. You imagine that her clitoris must be so hypersensitive that every minuscule twitch of his tongue would feel like a whip against it, how she must be able to feel the pounding of her heartbeat through that pulsating morsel. She screams for mercy, that she can’t come anymore, thrashing around in a futile attempt to get away from his cruel desire.

As the constant orgasms are thrust upon her, you are caught between craving to switch places, and almost glad not to be her right now. It certainly would be too much. You know how sensitive you get. You think  of the last time you masturbated for as long as you could, how few times you were able to make yourself come before it became too intense to continue. He has made her come at least 6 times and has no intention of stopping.

“Maybe I won’t stop until you pass out,” It was barely audible, but you heard it.

Your mouth is slightly open, wondering if it’s really going to go on that much, if he’ll keep torturing her, using her pleasure as a weapon.

Suddenly, there is a knock on the door. Her orgasmic screams ring in your ear as the soft glow of your laptop’s blue light bathes you, like a spotlight, in the darkness of your bedroom. You are breathing deep and fast, your heart racing… so turned on yet frozen in a mixture of trepidation and anticipation. Just as you were asked, you’ve watched her ordeal of wonderful torment, it lasted so long and the video still hasn’t finished yet. So cruel, making you watch what is to come. The door opens… now it’s your turn….

Intimate Tickles found this article quite interested, and we thought you might to. We give all the credit for this article to J Beresford. Click Here To Read This Article From It's Original Source