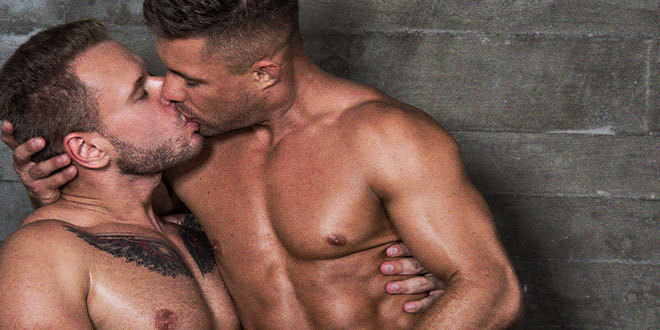 One month since the beginning of confinement. My boyfriend is spending his days in endless phone calls and zoom meetings while I stay parked in the bedroom, not allowed to show my face. As a freelance journalist, I am used to staying at home. Unfortunately, I am facing my worst case of writer’s block and can’t even count on sexy time with my boyfriend to relax. It should have been a perpetual sexathon. Instead, we made love twice the first week and that was the end of it.

He is naked, his skin is so pale it’s almost glowing. He sports defined muscles and a shadow of hair dusts his torso and lower belly in a trail from his navel to his pubic bone.

He is kissing someone behind him. A Black man. The kiss is raw, radiating with possession and power.

This is the hottest thing I have seen lately. My breasts are heavy against the fabric of my nightgown, and I can feel desire pooling between my legs. In a trance, I take my clothes off.

The Black man shoves the White man against their kitchen countertop. He kneels slowly and takes him into his mouth. The White man grabs the surface behind him for support.

My fingers glide on my skin, through my small patch of curls and between my lips. I am hot, smooth and wet already as I play with my opening before pushing one digit inside.

The White man is pumping his hips fiercely now, using the Black man’s mouth. The man on the floor is not touching him though. His hands are occupied with his own cock. A second and a third finger join the first one as I thrust, in time with thr White man.

The pleasure is coiling in my belly. Dark, forbidden, exciting.

He is close, I can tell but the Black man stops him with a hand on his leg. He gets up and kisses him fiercely. Their torsos are pressed together, their cocks two rigid lengths against one another. The White man circles them both and begins jacking in a steady rhythm.

My left hand is kneading my breast while my drenched digits whirl around my clit in tight loops.

The Black man says something and the White man turns around the countertop. His forearms against the marble, his ass on display against the Black man’s cock, rubbing, teasing.

I moan out loud as I flick my nub. My nerves firing, I feel alive.

The Black man spanks the White man hard. Once. Twice. The other man stops moving.

I pinch my nipple and plunge my fingers into my core once more while the Black man grabs a bottle of olive oil and pours the liquid on himself. He spreads it up and down his length, then one hand is plunging between White man’s buttocks. He does something that makes the other man go rigid.

His forearm is pumping. I moan again, louder this time.

Are you being naughty Angel?

I jump and drop my hands when I hear my boyfriend’s voice against my earlobe.

Somehow, I don’t believe you. Can I check?

He grabs my wrists and sucks my fingers in his mouth, licking them clean.

Someone is having fun without me, I see. What got you so flustered?

My eyes jump to the window. The Black man is entering the White man in one swift move, both hands on his hips. I can’t look away when he gives it to him, one, two pumps before fucking him earnestly.

Soft hands caress my thighs and push them apart. My boyfriend grabs one and pushes his nose against my folds, He breathes me in.

His voice is gravelly, rough against my sensitive flesh.

He licks me before plunging his tongue in me. I shudder from pleasure and grab his head.

Oh, I think you do. You are drenched.

He boldly enters me with two fingers and fucks me, alternating between quick jabs and slow, come-hither motions. Perfect to keep me on the edge.

Confess and I will make you come.

Yes, yes, I like to watch, I breathe defeated.

His lips find my clit and he sucks. It’s too much. The Black man pounding the White man while my boyfriend is pleasuring me. I go over the edge in a rush. When my tremors subside, my boyfriend perches me on top of our kitchen table and pushes into me.

Fuck, you feel so good. My dirty little angel.

I grab his buttocks and press him closer. He kisses me while thrusting into me. My hand glides between us and I start jacking him with my juices. It’s his turn to moan against my lips.

Seeing our neighbors inspired me. With my middle finger, I caress his asshole. My knuckle breaches his tight ring of muscles. My boyfriend grunts and stops moving.

His tone is a dark warning but I don’t listen. In goes my second knuckle. I touch something small, spongy and he lurches, his cock vibrating inside my walls. I do it again watching his face and it is pure bliss.

I move, fucking him with my cunt, and rubbing my finger against his gland. It’s not long before he spurts into me with a low cry.  I turn my head and see the White man watching us. He winks at me. Staying home just got more interesting.

Intimate Tickles found this article quite interested, and we thought you might to. We give all the credit for this article to Alix Van M. Click Here To Read This Article From It's Original Source