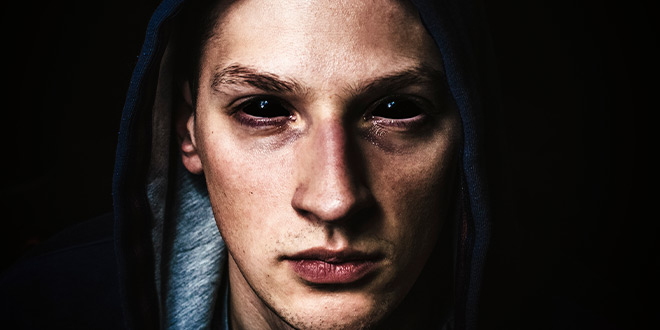 It seemed like they were trying to save him, but Radical Zombie Saviors are tricky that way; one  moment they’re saving you from an all-out attack, the next minute your asshole’s impaled. I  wasn’t sure Finn wanted to be saved, still, I stayed in the safety of the alcove – in the shadows –  and I watched. I waited to see if saving him for real was going to be necessary.

I hated to admit it to myself but I was already hard. I knew that would piss him off, but I couldn’t  help it. He always looked so fucking hot when he was in over his head.

Almost immediately the Radical Zombie Saviors showed their true intentions; they had Finn  trapped, his trousers down to his ankles. Then his cotton whities – whoosh – right down they  went, too. I’d sort of seen it coming, but even I wasn’t expecting it to happen this fast. And now  he wouldn’t be running anywhere, with all that stuff bunched around his feet. I was as good as  winning this one.

“Colton!” he shouted out into the eerie blue dark, his panicking voice echoing up in the domed  ceiling – “if you don’t come help me, I’m going to fucking kill you, motherfucker!”

It was an empty threat, of course, because now they were bending him stark naked over the altar  – which suddenly seemed conveniently low. His hole was at perfect dick range. It would just be  a moment. Just one moment. That was all that would be required for one of the Zombie Saviors

to pull out a hard dick and press the fat tip of it against Finn’s suspiciously open asshole (that  guy’s always so fucking eager, I thought to myself; he is such a dick-slut); the head of the  Zombie Savior’s cock didn’t actually have to go all the way in…

Bingo. There it was. A Zombie Savior-cock, touching Finn’s hole.

Finn pulled off his goggles and I could see he was going to try to argue his way out of losing.  But he knew he lost. “Come on,” I said, grabbing a handful of his hair and pulling his head down  toward my crotch.

“Shut up,” he said, but he couldn’t stop himself from smiling at me – his vanquisher. He was a  good loser after all. “But what bothers me,” he said, as he positioned himself between my hairy  thighs, spread them wide and got comfortable, “is why you always get so fucking hard when you  know I’m losing.”

“Happy?” he scoffed indignantly, then he spit quickly into the palm of his hand and took hold of  my shaft, his wet tongue landing on my balls at the same moment and getting them sloppy wet in  no time.

Finn snorted out a laugh. Not at all self-consciously. “Fuck you,” he said, and then most of my  sac got sucked gently up into his hot mouth, his tongue rolling my balls around in there. It felt  good to win. His slippery grip on my shaft slid the skin up and down with just the right pressure.  He actually was no kind of loser at all.

I put the headset back on and pressed CONTINUE. “I’m going to let them go hard on your ass, if  that’s okay.”

Finn hummed his reply around the balls that were stuffed in his mouth and I took it as an  agreeable ‘yes.’

The game resumed all around me, in creepy 3D slime-oozing ultra-violet. I was still in the  shadow of the alcove, watching, but I was able to zoom in for an up-close and personal view.  One of the Zombie Saviors had come around to the front of the altar, grabbed both of Finn’s  wrists and was pressing Finn firmly down against the sacred table. The one who’d had his dick  out before was now down on his knees between Finn’s naked legs and promptly began rimming  him. The Finn who had my balls in his mouth groaned at just the right time: The Zombie’s  tongue was getting deep into the 3D Finn’s asshole.

Oh shit. I groaned now, too. The suction of Finn’s mouth pulled on my balls, until the spit  collecting in his mouth oozed out and drooled down into my own asshole. I felt the sudden  unexpected pressure of Finn’s finger slide in.

“Okay,” he conceded – although with some reluctance. But within moments, good loser that he  was, he had his finger out of my ass and my aching cock sliding into his mouth.

“Oh yeah,” I said. I instantly felt delirious. I was so hard and had been for a while already. Then  I watched the Zombie Savior’s cock grow to enormous proportions before my eyes. It was thick  and fat and huge, slimy and putrid green – unlike anything Finn’s asshole could handle in real  life, although I knew – dick-slut that he was – he would probably give it his best shot.

I rubbed lightly on my nipples while I worked my cock deep into Finn’s mouth, feeling the head  move easily past his vocal cords and press firmly against that soft spot at the back of his throat.  “Oh yeah,” I said softly, suddenly thrusting my cock deeper down Finn’s throat – going an extra  half-inch, then a little more. Finn cried out around my cock, gagging a little, but keeping me in there, which suited the drama in my headset perfectly: The Zombie Saviors had Finn spit roasted. One huge slimy-green cock was shoved way down the 3D Finn’s throat, just as the  Zombie Savior between his legs stretched Finn’s asshole impossibly wide and slooshed his huge  cock right on up, penetrating deep into Finn’s 3D bowels.

I was twisting my nipples now, and pushing deep into Finn’s throat. The spit was drooling out  everywhere, his throat gagging all over the length of me.

“Oh shit,” I cried, helplessly. It felt like I was coming in bucketloads – I was pumping and  pumping the stuff right down Finn’s throat – when Finn slid a second finger up my ass and  started fucking me while I came. “God, oh god. It feels so fucking good to win, Finn, you  fucker!”

And just as I thought my balls were emptied, a Zombie Savior was suddenly right behind me, his  huge 3D cock pushing right up my ass – stretching me open, forcing me open all the way up.  “Christ!” I said, gasping. “Christ!” It felt real. Totally real.

“Finn. You cheated!” I cried out, trying to catch my breath; trying to get my hole to quit  quivering around what felt like a 3D log up my ass.

“No, dude,” Finn said triumphantly. “I won.” He took off his goggles and smiled at me.  “Consider yourself fucked, Colton. I scored.”

He pulled his fingers out of my ass and said, “Put the headset back on. Go on. And turn over.  You know the drill, loser.”

Panting, covered in sweat now, I turned over and put the headset back on, while Finn put back on  his own goggles.

I was still in the alcove, but now I was stripped naked and staked out face-down against the cold  stone floor. It was covered in ultra-violet sewer slime, and as I felt Finn’s hard cock push up into  my asshole, it became the Radical Zombie Savior’s cock: The massive cock. The slimy oozing  monster cock was stuffed up into me and I felt it climbing in deeper, up and up, stretching me  open, until I felt the monstrous thing push clear up out of my mouth.

Intimate Tickles found this article quite interested, and we thought you might to. We give all the credit for this article to Marilyn Jaye Lewis. Click Here To Read This Article From It's Original Source