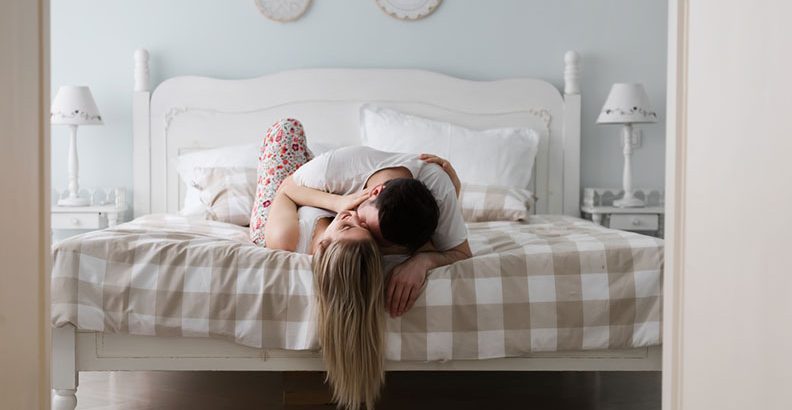 How Often Do Married Couples Have Sex? Are You Getting Enough?

When you get married, your sex life can change drastically. But how often do married couples have sex? Here’s how to tell if you’re having enough.

People aren’t kidding when they say marriages changes things in the bedroom. But it might not be in the way you think. The reason your sex life lags a little when you’re married is simply because you’ve been together a while. So how often do married couples have sex, anyway?

It really depends on the couple. Some people let that sex rut come into their lives without doing anything about it and only have sex once a week – if that. Others, however, decided to take action and do something about their sex lives and for that reason, they have sex a lot more.

Without being close and intimate in the bedroom, you won’t be out of the bedroom. You’ve heard it time and time again, yet it still holds as much truth and value as it did the first time you heard it. And that’s simply because it’s super important.

Couples bond through sex. Yes, you can bond outside of the bedroom but when you have an active sex life, you’re more likely to be comfortable. And when you’re extremely comfortable with your partner, you’re far more like to communicate better. We all know how important that is for a healthy relationship. [Read: Why is sex important in a relationship?]

How often do married couples have sex?

If you’ve been wondering this question as you prepare for marriage or are feeling like your sex life is a little slow, we can help set things straight. Here’s how to know if you’re getting enough attention between the sheets.

If you are, you could just be here looking for some validation after a friend made a comment. No matter what, if you’re happy with the sex and your partner is as well, you’re definitely having enough. Even if your friend brags about having more, it doesn’t matter if you’re pleased. [Read: 10 ways to handle sexual frustration with your partner]

#4 You’re both initiating sex just as much. If you’re always the person to initiate sex, it’s easy to feel like your significant other isn’t really into it. However, if you’re both initiating it equally, then you know the desire to be intimate with one another is mutual.

This is a huge sign you’re definitely having enough sex. Otherwise, you’d be doing all the work or they would. So long as things are equal, your sex life is just fine.

#5 You don’t have a low sex drive. Low sex drives are often a result of lack of sex, as strange as that sounds. Sex is kind of addicting in that way. The more you have it, the more you want it.

#6 You’re not fantasizing about someone else. This can often happen when couples aren’t having enough sex. You’ll start to fantasize about getting laid and it’s usually with someone else since your spouse isn’t doing the job.

So if that’s not a problem and the only person you really think about having sex with is your significant other, then you’re probably getting enough sex. Obviously, it’s okay to fantasize about someone else every now and then. If it’s the main thing you think about, however, it’s an issue.

#7 You’re trying new things regularly. If you really want to know if your sex life is healthy, no matter how often you have sex, all you really have to do is look at what you’re doing in bed. Are you doing the same thing over and over again? Or are you trying new stuff?

If you’re actively trying new things pretty frequently, then you have a much healthier sex life than many other married couples. As long as you don’t feel bored and you’re satisfied in bed, your sex life is great. [Read: 17 fun sex ideas to mark off on your sex bucket list]

#9 Your non-sex life is just as great. Believe it or not, how you feel about your partner outside of the bedroom says a lot about how they pleasure you between the sheets. If you’re really happy and things are going well, you’re probably having enough sex.

#10 You talk about sex regularly. This is a lot more important than you think. Couple who never discuss sex usually don’t have enough of it or aren’t having the sex they really want. If you’re flirting a lot and talking about how great the sex was, you’re both definitely satisfied.

So long as you can openly discuss sex and how it’s going, you’ll continue to have a healthy, satisfactory sex life. The more you talk about it the better it’ll get, too.

[Read: 10 naughty ways to get over a sexual dry spell quickly]

So how often do married couples have sex? As much as they need to in order to both be happy and satisfied. That is, if they’re happy. Sex can vary from couple to couple but as long as you know when you’re having enough, you’re fine.