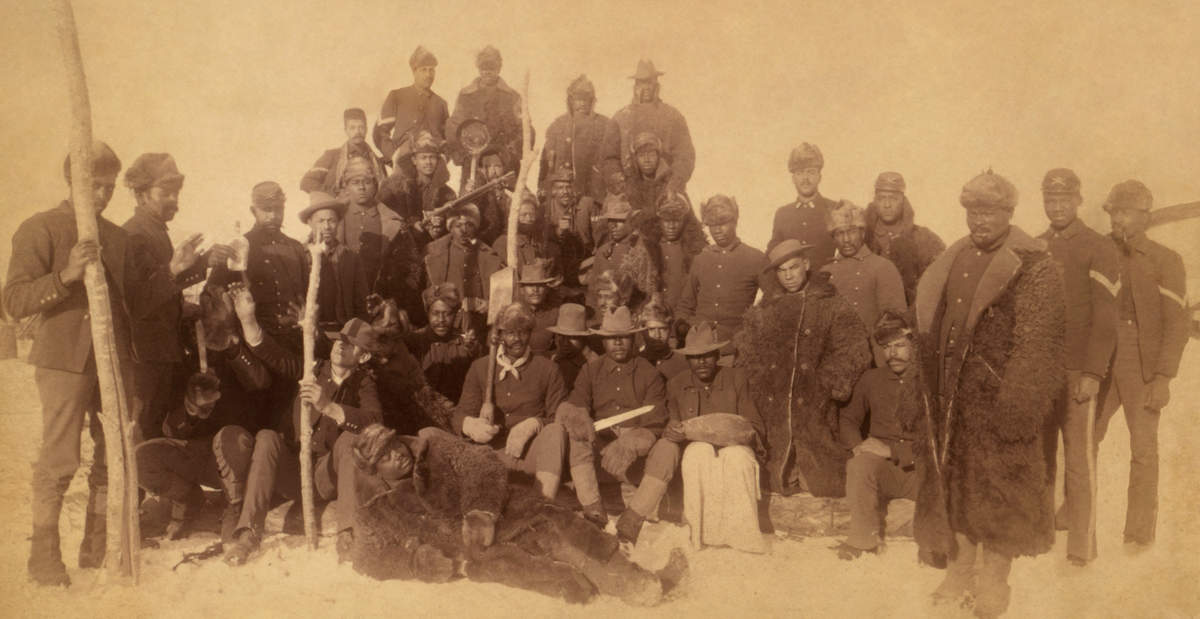 Today we celebrate the legacy of the Buffalo Soldiers and honor their place in American history. It was on July 28, 1866, with the passage of the Army Reorganization Act, that Congress created six army regiments of all-black soldiers, consisting of two cavalry units—the 9th and 10th Cavalry—and four infantry units—which were later consolidated into the 24th and 25th infantry units. They all eventually were known as Buffalo Soldiers.

The 9th and 10th Cavalry became two of most decorated units in US military history. The 9th was organized in Greenville, Louisiana. After training, the first place they were sent to was San Antonio, in April 1867. The 10th was organized in Fort Leavenworth, Kansas, and first took action in August 1867, when they were ordered to Fort Riley, Kansas, to protect construction of the Pacific Railroad.

The 10th Cavalry was the first to be given the name Buffalo Soldiers, but that spread to the 9th as well, and then to the two infantry divisions. One story says that Cheyenne warriors gave them the name during a battle near Fort Hays, Kansas, in 1867, because they thought they fought as strong as buffaloes. Another story says the Cheyenne came up with the name, but not until 1877. Still another story says the Comanches came up with the name in 1871. Besides the theory that the name was given to them because of their toughness in battle, another theory says that Native Americans gave them the name because they had dark, curly hair like the fur of buffaloes. It could be the they were given the name because of a combination of these reasons. Regardless of why they received the name, they took it as a badge of honor. Most believe it was a term of respect, although some do believe that it may have been an insult.

Buffalo Soldiers first focused on the American West. They built roads and forts, confronted cattle thieves and outlaws, protected settlers as they crossed the frontier, and controlled the Native American populations of the Great Plains. The cavalry regiments were in many battles of the Indian Wars. Beyond the West, Buffalo Soldiers served in Virginia, New York, and Vermont, and worked in National Parks such as Yosemite and Sequoia.

They fought in Cuba during the Spanish-American War—alongside Theodore Roosevelt and his Rough Riders at San Juan Hill, and in other battles as well. In the early 1900s, they could be found in the Philippines, and during World War I they were at the Mexican border. The two cavalry regiments became part of the 2nd Cavalry Division in 1940. They trained for combat in World War II but did not see action. In May 1944, the two cavalry regiments were deactivated. President Truman issued an executive order desegregating the Armed Forces in 1948, but it took a few years to implement. The last of the Buffalo Soldiers were integrated by 1952.

Buffalo Soldiers received more than a dozen Congressional Medals of Honor, as well as other accolades. They had the lowest desertion and court-martial rates of their time. In 1992, Senate Joint Resolution 92 was passed, designating Jul 28, 1992 as Buffalo Soldiers Day. On July 24, 1992, President H.W. Bush proclaimed it as such. During that same week, Colin Powell dedicated a monument to the Buffalo Soldier at Fort Leavenworth, Kansas.

Buffalo Soldiers Day is being observed today! It has been observed annually on July 28th since 1992.

← National All Or Nothing Day
National Dance Day →