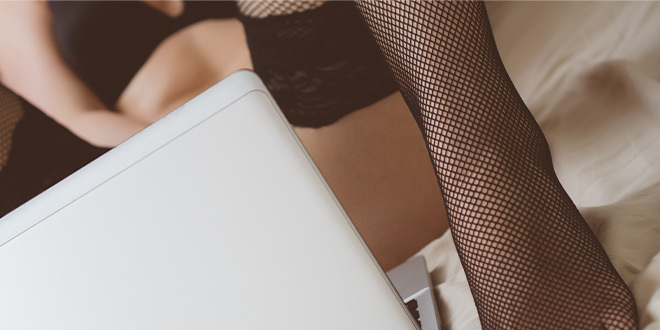 Sabrina’s right hand hovered tentatively over her mouse, the cursor poised to click Broadcast. While she’d always found the idea of showing off for others a huge turn-on, she’d never dared to actually act on this fantasy. She’d come close a few times – and had even registered on an amateur cam site – but the fear of being seen by someone she knew always stopped her from turning her fantasy, however arousing she found it, into reality.

Even so, her fear didn’t stop her from setting everything up as if she was going to go through with it. Laid naked on the bed, with her favourite toys beside her. Her webcam set up just right, so her face remained hidden, while showing everything else. Her account logged in and the Broadcast button dangerously in reach, if only she dared to make the leap. Not that she ever had, but it helped her fantasize better when she knew she so easily could.

“I mean, how likely is it that someone I know would see me anyway,” she thought to herself. Lockdown had Sabrina hornier than she could ever remember, and the wine she had drunk earlier helped to loosen her inhibitions just a little.”And even if they did see me, they won’t recognise me if I don’t show my face.”

The thought of actually going through with this, as always, had Sabrina turned on and in need of relief. Moving her left hand towards her pussy, which was already wet with anticipation, she gently teased herself, closing her eyes. She imagined clicking Broadcast, suddenly streaming herself to strangers online. She imagined the number of viewers climbing as her show went on, until hundreds of people saw her bring herself to orgasm. She even let herself imagine someone she knew recognising her, and all the different things that could lead to – once lockdown was over, of course.

By this time Sabrina was aching to slide something inside her. Not wanting to lose the mental image she had in her head, she kept her eyes closed as she reached for her rabbit. As she slid it inside herself, she let out a moan, and turned it on. Sabrina started slowly at first – she wanted to take the time to enjoy the moment – her imagination stimulated her just as much as the rabbit itself.

The pleasure was almost too much to bear and Sabrina opened her eyes. In front of her, on the screen, was a video – no, a live feed, of her body and a viewer count in the hundreds! “Oh fuck, I must have accidentally clicked Broadcast,” Sabrina thought. But that realisation aroused her even more and, with that, she brought herself to a leg-shaking, toe-curling orgasm, in front of her very real audience.

Intimate Tickles found this article quite interested, and we thought you might to. We give all the credit for this article to Pup J. Click Here To Read This Article From It's Original Source