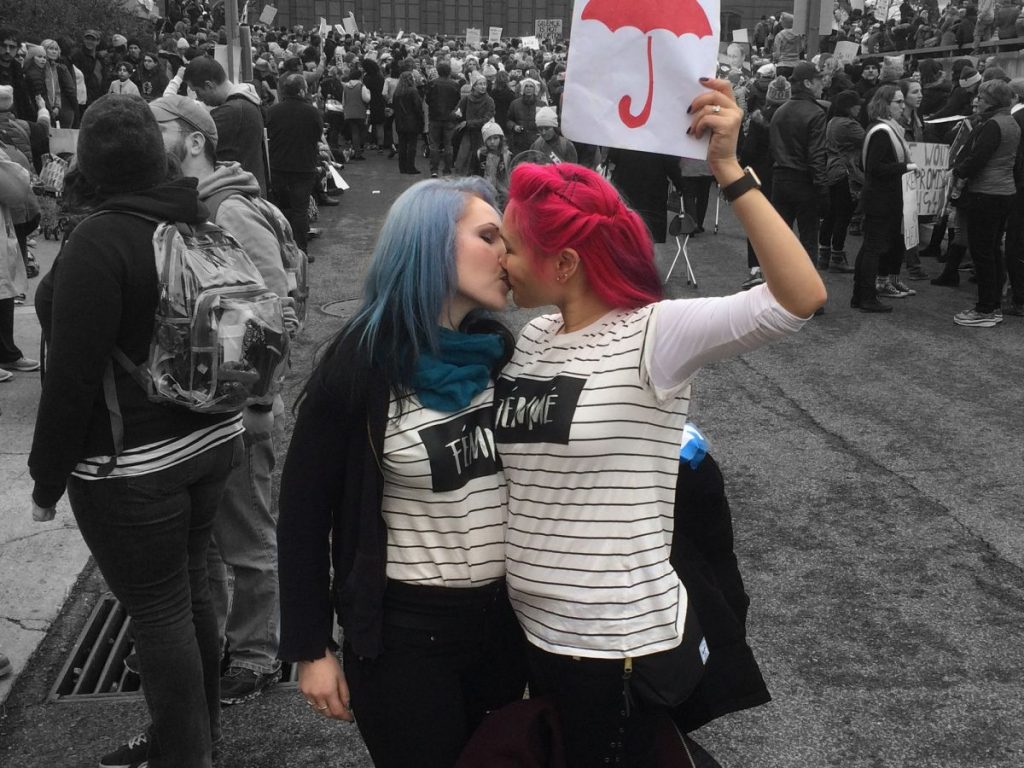 Why It Matters That Sex Workers Were At The Women’s March In D.C.

That’s how I came to be outside Remedy Diner in NYC’s Lower East Side very early on Saturday January 21, loading coolers of turkey and cheese sandwiches and hand-painted poster boards onto a white bus pulsing with purple lights. At 5 a.m., I piled onto the “disco bus” with Whorecast producer and Free Speech Coalition Director Siouxsie Q, relationship therapist Dylan Ryan and her girlfriend Priscilla, Divine Bitches (link NSFW) director Madeline Marlowe, and her porn star partner Will Havoc. Fetish model Lea Hart and her burlesque artist girlfriend Vonka Romanov shone through the dark morning with their candy-colored hair and matching “Femme” t-shirts. We were joined by partners and friends who have stood by us without judgment as we made the choices to do the work that was right for us.

Our bus crew was in no way fully representative of all the sex workers who marched across the world that day, or the diverse sex workers living in America, or even the sex workers most at risk from the Trump administration. We were simply friends who all believed that Trump was unfit to form the policies that influence our lives, and we could all agree to make that simple statement with our presence.

Porngraphers, escorts, pro-dommes, cam models, and strippers are used to being controversial. But when we decided to march together, we had no idea the Women’s March would give us such a perfect example of that divide.

Some backstory: On January 12, the organizers behind the Women’s March posted their official policy platform on their website. Among powerful calls for reproductive justice and equal pay for equal work, a single line stood out like a stripper’s Day-Glo platform pumps: “…we stand in solidarity with sex workers’ rights movements.”

It turns out that Janet Mock, the best-selling author and advocate who has spoken eloquently about her experiences doing sex work as a young trans woman, contributed this line. In no less powerful a nod to our history, the legendary advocates for trans women of color sex worker rights Miss Major Griffin Gracy, Marsha P. Johnson, and Sylvia Rivera were included in the list of revolutionary leaders.

In many group texts and social media posts, my community expressed relief and elation at being explicitly welcomed. Sex workers are often excluded from mainstream women’s rights statements, for reasons ranging from respectability politics to fundamental disagreements within feminist discourse about whether or not sex work is labor. The fact that the platform so explicitly called for economic justice, police accountability, and the recognition of LGBTQIA rights gave many sex workers I know the hope that the Women’s March was taking a stand with us.

Our cynicism returned the week before the march, when it began circulating on Twitter that the Women’s March had changed its platform without fanfare. Any mention of “sex worker rights movements” was erased and replaced with the line: “we stand in solidarity with all those exploited for sex and labor.”

This represents a crucial ideological difference that sex workers are all too familiar with. For some, sex work is perceived as synonymous with victimhood. Some people cannot relate to the choice to have sex for money, to perform sex on camera as a career, to dance naked for one’s livelihood. To rhetorically shift from solidarity with a movement to a condescending savior stance (implied by “exploitation”) removes a recognition of women’s agency. (To be clear, sex trafficking and exploitation exist and are huge issues feminists should be concerned about — but it’s crucial not to deem all sex work exploitative.)

To rhetorically shift from solidarity with a movement to a condescending savior stance removes a recognition of women’s agency.

Sex work Twitter exploded in anger. By the end of the day, Mock took note. She tweeted that she was working to have the line changed back, and posted the following to her Tumblr:

“…as a trans woman of color who grew up in low-income communities and who advocates, resists, dreams and writes alongside these communities, I know that underground economies are essential parts of the lived realities of women and folk. I know sex work to be work. It’s not something I need to tiptoe around. It’s not a radical statement. It’s a fact. My work and my feminism rejects respectability politics, whorephobia, slut-shaming and the misconception that sex workers, or folks engaged in the sex trades by choice or circumstance, need to be saved, that they are colluding with the patriarchy by ‘selling their bodies.’ I reject the continual erasure of sex workers from our feminisms because we continue to conflate sex work with the brutal reality of coercion and trafficking. I reject the policing within and outside women’s movements that shames, scapegoats, rejects, erases and shuns sex workers…”

Indeed, the language was changed again, and sex worker rights were added back into the platform. But the Women’s March organizers have yet to explain this mysterious waffling. Of course, this is nothing new for sex workers. We knew we would still go; we knew we would show up, whether or not we were recognized.

As the sun came up on the southbound disco bus, we passed out sandwiches, popcorn, and cold brew coffee. We braced ourselves against the shaking seats and poured Maalox into water bottles for kits to neutralize tear gas. We passed around sharpies to write the public defender and march hotline numbers on our arms. We split up into affinity groups to keep track of one another.

When we arrived in D.C., we passed out the signs we’d made the weekend before. Dylan grabbed a yellow poster which read “Pleasure is not a public health crisis,” a reference to the 2016 Republican party platform. Siouxsie chose a poster depicting two middle fingers flanking the words “BOY BYE,” a sly Beyoncé reference. Madeleine, who uses a wheelchair and has had three brain surgeries in the past year, held the sign, “Queer / Disabled / Sex worker / Human” in her lap. I was proud to take a cue from the Red Umbrella Project, an organization focused on sex work advocacy, which made shirts reading, “Hos before literally everybody.” We used masking tape and safety pins to attach red umbrella symbols to our coats, and headed to the Metro station.

As we all stood, waiting to march, people approached us to ask about the red umbrellas on our backs. We explained that the red umbrella has been a symbol of sex workers’ strength and resistance to discrimination since the beginning of this century. This march gave us opportunities like this, to look strangers in the eye and explain what these rights mean to us.

During the march itself, we had the same experience that many other people in D.C. had: We couldn’t really move or march much of anywhere past the estimated 500,000 people gathered. We had no cell phone service, so we didn’t know what exactly was happening. We got separated, and then found one another again (thankfully, the BOY BYE sign was easy to spot). We could barely hear Angela Davis. We saw a woman with a “Sex Work is Work” sign, and started chanting those words until she made eye contact and joyfully embraced us.

We missed Janet Mock saying the following in her speech:

“Our approach to freedom need not be identical but it must be intersectional and inclusive. It must extend beyond ourselves. I know with surpassing certainty that my liberation is directly linked to the liberation of the undocumented trans Latina yearning for refuge. The disabled student seeking unequivocal access. The sex worker fighting to make her living safely.”

On social media, we saw other sex workers with other signs:

My body is my business

Save us from saviors

The next day, while decompressing over spicy Bloody Marys, Lorelei told me that the best part of the march was seeing the unified rage of people of very different identities. “A woman with ‘Black Arab immigrant’ written on her sign looked at Madeline’s sign, looked us in the eyes, and silently held her fist in the air in support of us.” she said. “I put my fist in the air in support of her — identity politics don’t divide us.”

Exhausted yet fired up, we discussed what the next four years and beyond hold for us. Jeff Sessions, Trump’s attorney general appointee, has already sworn to “vigorously prosecute” obscenity laws which target adult pornography. Amnesty International has called for the decriminalization of sex work, but there is a long battle ahead in convincing people that decriminalization is the best choice for economic, transgender, and racial justice.

Fortunately, Saturday’s march taught me an important lesson as we forge ahead: Sex workers will march, whether we’re included or not. Maybe one day our signs won’t have to assert basic facts, like sex work is work. And perhaps the next time a women’s march is planned, sex workers won’t be excluded (even temporarily) from the feminist platform or made out to be victims. If Saturday proved anything, it’s that sex workers are in this with the rest of women and our allies — and we are all more powerful when we march together. But until we are explicitly welcome, rest assured that we will continue to bring the bodies we use for our livelihoods and wellbeing into the streets to fight for the rights we all deserve. See you next time.

How To Maintain Long-Distance Relationships

Almost Half Of American Men Have HPV, Finds Frightening Study