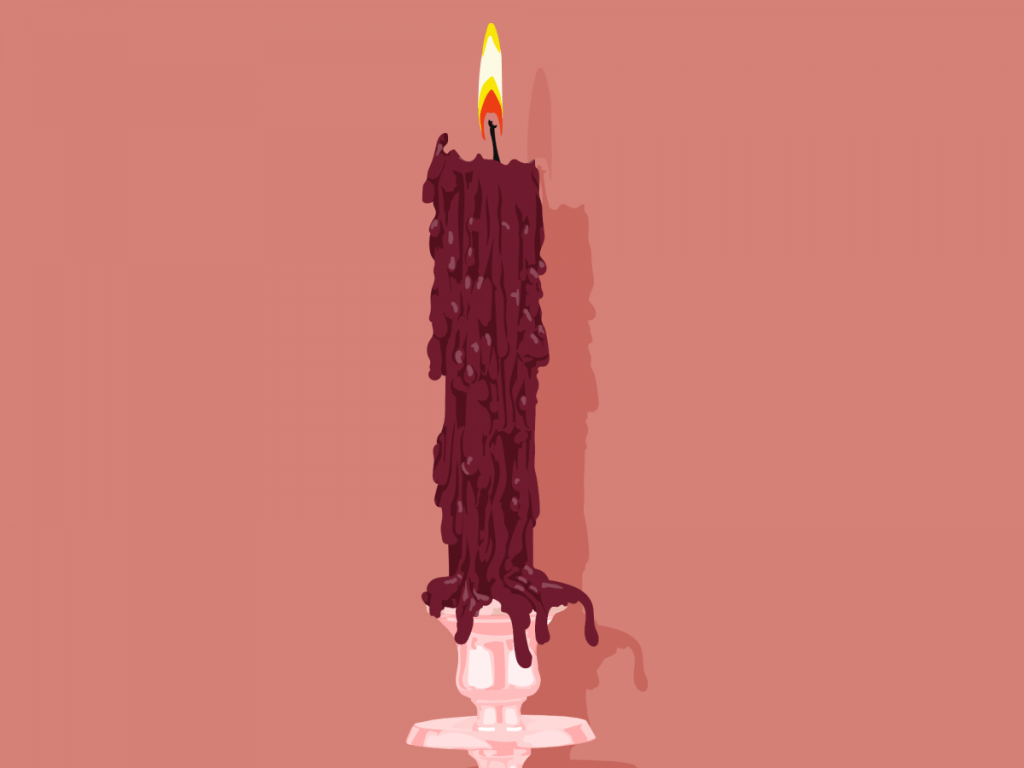 From Untouchable by Elizabeth SaFleur

Every candle in Carson’s room was lit, over two dozen pillars similar to the ones he’d used in a demonstration he’d given at Club Accendos months ago. The young girls giggled and screamed as their partners dripped hot wax on their bellies and breasts. No one got burned or hurt. The sensation play simply brought out their innate melodrama. He’d been bored to tears. Right now, nothing interested him more.

After laying London down on the table, he took a moment to admire the wisps of caramel and chocolate strands by her cheeks, her ponytail dripping over the edge of the table.

“No.” She shifted and the plastic crinkled underneath the sheet. “I’m fine.”

Carson freed his belt from her waist. A loud clank when it hit the floor made her startle.

After attending to her arms and hands, he poured more oil over her pussy. He made sure every hair was coated in the emollient. He wasn’t in the business of giving bikini waxes. Soon her thighs, calves, and feet wore an oily sheen illuminated by the candles. She glowed like a marble sculpture —if it wasn’t for her constant wiggling.

“Relax.” He massaged her feet, pulling on each toe and massaging her arch. Finally, her hands unclenched their hold on the sheet and splayed open.

He tipped a few teaspoons of melted wax from one of the candles into his hand. “Tell me if this burns.” He spread the warmth over her greased belly.

She inhaled sharply and her hands darted up and then settled back down.

“Not burning…” He could tell she squeezed her eyes tighter under the blindfold.

The wax grew tacky under his palm. More gasps came from her throat as he dribbled a large drop from the candle onto her arm. Her hands jumped from the sheet only to float back down.

“Shh, feel it.” He grasped her wrist and angled it away from her body. “Palms up. Don’t move.” He picked up two pillar candles, one in each hand. “No matter what, London.”

Carson tipped both candles over her wrist. Her fingers danced as the drippings made contact and she gasped. “Oh!” A wax line formed, the edges pooling on the sheet.

“You are being cuffed to the table with wax. If you break these restraints, I’ll find something stronger.”

She curled her fingers as if she tested the bond.

He streamed more wax until she wore a thin manacle on her wrist. The bond barely covered her skin. If she was the submissive he believed, she’d feel it like an iron chain.

“You’re mine tonight,” he said.

She sent her other arm out, away from her body as if ready for the same treatment. Her acceptance of his handling made his groin tighten in anticipation.

He secured the other wrist with a waxy shackle. But her legs would require more than candle drippings. In addition to the soy candles, he’d warmed his largest block of paraffin in a crock pot. If his mother knew what he did with her Christmas gift, she’d lose her final hope of him ever being domesticated.

He dipped a ladle into the wax bath and continued until her ankles wore similar restraints to her wrists. Now cuffed by wax chains, spread wide, he stepped back to admire London’s captivity. A small smile played on her lips, finally relaxed. Finally giving into the inevitable.

Carson picked up a small paintbrush and dipped it into the pot. He painted a thin layer of wax over one nipple. She arched and sighed under the sensation. He then took one of the larger candles, and holding it high, let a long stream flow over her breast. She cried out and flinched. One hand broke through its cuff.

Her forehead furrowed. “I-I’m sorry. I wasn’t expecting it.”

She returned his laughter, but quickly swallowed it back. “Carson? I won’t do it again.”

He touched her arm. “Of course you won’t.”

After he secured her wrist with more wax, her fingers quivered. Tension in her belly returned, perhaps fighting to lift herself toward him? Her pussy glistened, and not from oil, but from growing arousal. London enjoyed being handled, he thought. He mentally added the sentiment to London’s List.

She balled her fists. The thin shackles didn’t crack. He spilled more melted candle onto her waiting body. A seal formed over her breast from drizzling wax, spiral-fashion.

“This is the only white you should wear.”

He turned to the paraffin wax bath and scooped out a full dipper of the mix. With one long stream, he drew small circles around her other breast. A coiled cap formed over her flesh. She squirmed under the liquid heat, soft moans escaping her lips. More candle drippings formed waxy rivers and tributaries over her belly and her hips. Her skin reddened around the waxy parts from the stimulation and heat.

He traded candles. He’d empty one of its liquid while allowing the others to burn down more, creating their own small pools of melted warmth. Large sections cooled to semi-hardness. Unable to stay motionless any longer, her back arched with each new stream that met her skin. Wax separated and cracked, except for the thin shackles securing her wrists. She balled her fists, as if willing them to stay intact.

By the time he’d moved to her legs, she took in big gulps of air. A light sheen had formed over her upper lip and forehead. He ran one long line of warm melted candlewax down one thigh to her knee.

When he crossed her low belly with a large spill of wax, she squealed. Her hands threatened to dart upward. Her manacles barely held. But she stopped herself from completely freeing her wrists and ankles.

His belly clenched. London, the woman who fought his every move in meetings, argued every word from his mouth, now fought to honor his control. The shields London had erected to deny her desires had begun to fall away.

23 Sexts To Send To Your Partner Now

When You Kink-Shame Donald Trump, You’re Missing The Point

11 Tips From Phone-Sex Operators To Up Your Dirty Talk