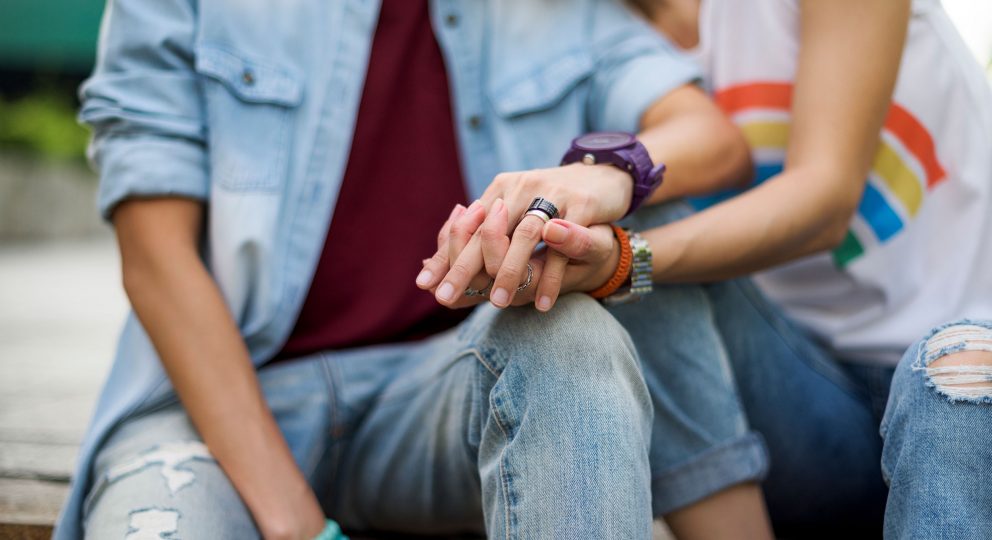 A few weekends ago, I woke up with a nasty migraine. I knew it the second my eyes opened on that Saturday morning—the imaginary ice pick that has plagued me my entire life was back in its usual spot: right behind my left eye. But this time was different. I live with my boyfriend now. In the five and a half years we’ve been together, he’s seen bits and pieces of my migraines, but this was the first full-fledged attack he’s ever witnessed. He doesn’t get migraines, so he can’t relate, but he certainly sympathizes as I writhe around with my hands over my eye like a makeshift pirate and run to the bathroom to vomit.

Between trips one and two to the bathroom, with a nap in between, I realized he had cleaned the toilet for me, as the daily grime had built up.

“I just didn’t want you to have to look into a dirty toilet,” he answered matter-of-factly when I thanked him. His Love Language is “Acts of Service.” Can’t you tell?

Developed by Dr. Gary Champan, Love Languages are the way we express and experience love. There are five of them, and you can take a quiz online to learn your own love languages and how to apply that knowledge to your relationships.

My love language is Physical Touch; it always has been, and I suspect it always will be. So when I crawled back into bed during that migraine, I asked my boyfriend if he would lay with me for a while. I consistently have a hard time falling asleep with a migraine due to the pain, so I knew his calming presence would settle me down. As he played games on his phone with his left hand, he held mine with his right. I fell asleep within minutes.

His presence, even while he played games on his phone, was no grand gesture, but holding my hand was a small moment of care and kindness that helped me. Those are the kinds of actions that couples can take every day to build connection.

The emotional importance of holding hands

A few weeks before the migraine, I suffered an intense week-long anxiety attack. From morning to night, if I wasn’t being distracted by work stress, my mind was spiraling into negative ruminations and panic. It was the most severe and long-lasting bout of anxiety I had ever experienced and I was terrified.

For a week, I tried all the anxiety-reducing tricks I’ve learned over the years: grounding myself, breathing, staying hydrated, taking GABA supplements, journaling, exercising, and talking to a therapist. These strategies made a dent in my anxiety, but the only thing that truly calmed me and soothed me was my boyfriend.

The first morning of the anxiety attack, I woke up in a panic and, after a failed attempt to sweat out the negative energy on the treadmill, I got back into bed with my boyfriend. I felt my heart rate slow a bit. As he listened to me explain what I was feeling, he gently rubbed my legs, and as I bent over to cry into the pillow, he rubbed my back. He held my hand as I tried to sleep and somehow, I was able to slip into a deep, exhausted slumber.

He knew that my love language is Physical Touch, and while I was suffering from anxiety, he was mindful of my need for physical connection. When he held my hand, he gave me what I needed to calm down and feel supported and loved through my struggle.

Throughout the rest of the anxiety attack, I relied on my new technique: touch my boyfriend as much as possible. Every evening when I didn’t have work on my mind and the anxiety came back with full force, holding his hand was the only thing that could quiet the dread and rebalance my brain chemistry. He got me through that terrifying experience by just existing. His calming energy and openness to be there for me was just the medicine I needed.

The phenomenon of interpersonal brainwave synchronization

After the anxiety attack was over, and after the migraine a few weeks later had subsided, I was out of town visiting my sister and missing my boyfriend. I was excited to see a text from him: it was a link to a study claiming that holding your partner’s hand during difficult times can sync your heart rate and breathing, and even alleviate pain. It’s a phenomenon called interpersonal synchronization, and it makes sense that those with a Physical Touch love language would find comfort and connection in holding hands.

The lead researcher, Pavel Goldstein, got the idea for the study while his wife was in labor. Goldstein noticed that when he held his wife’s hand, her pain seemed to be less intense than when he wasn’t. The study took 22 couples who had been together for at least a year and had them either sit in different rooms, sit together and not touch, or sit together and hold hands. They applied mild heat pain to the arm of one partner and watched the brain waves differ between the varying levels of closeness.

When the couple was sitting next to each other holding hands, the brainwave sync was the strongest. How incredible is that?

We spend years building connections with the people in our lives—romantic partners, close family members, best friends—so consider the importance of physical touch. The next time you experience a difficult situation, cling to your loved ones. Hold their hands, and see if that helps to calm you. You might be surprised at the kinds of emotional connection you can experience together through a small gesture of physical connection.

Check out The Marriage Minute, our free email newsletter that will improve your marriage in 60 seconds or less. Got a minute? Sign up below.

More in Research and Methods